[Posted: 9:30 AM EDT] Markets are quiet this morning; initial claims fell to a 49-year low.  Here is what we are watching:

Trade progress: President Trump and Vice Premier Liu are scheduled to meet at the White House today, a sign that trade talks are heading toward some sort of conclusion.[1]  Most of the outstanding issues have been resolved, although execution and enforcement remain undecided.[2]  The fact that the president is meeting with the chief Chinese negotiator is a good sign of progress.  However, the enforcement issue remains a concern.  China will probably not agree to a procedure that allows the U.S. to unilaterally apply trade sanctions on perceived shortfalls in Chinese behavior.  But, without the ability to have a “stick,” the U.S. will have no leverage after the deal is negotiated.[3]  We would expect some sort of mechanism to deal with disputes that triggers a round of meetings that might result in tariffs.  China will attempt to avoid a mechanism that gives unilateral power to the U.S.  If that issue can be overcome, the deal will likely be signed.

As a side note, Europe is struggling with Chinese trade issues as well.[4]  Much of this scrutiny is due to China’s size.  As China’s economy has grown, its mercantilist trade policies have had an increasingly negative impact on the rest of the world; thus, the pushback from the U.S. and EU are consistent with this issue.

Brexit: There were a couple developments.  First, meetings between PM May and Labour Leader Corbyn were said to be “constructive”[5] but “inconclusive.”[6]  Second, Parliament narrowly voted to order May to extend the deadline for Brexit.[7]  Thus, we are probably seeing a “can-kicking” exercise to avoid an immediate hard Brexit.  That outcome is mostly neutral for the GBP.

Rethinking negative nominal rates: Monetary theory argues that there is a “zero lower bound.”  In other words, nominal interest rates cannot go below zero because private actors will simply disintermediate—or, take their money out of the banking system rather than have the value erode due to a negative nominal rate.  When the FOMC hit the zero rate on fed funds, it deployed two other policies, forward guidance (rates will be low for a long time) and quantitative easing (flooding the banking system with reserves).  The ECB, on the other hand, along with a couple other central banks in Europe, decided to test the zero lower bound theory.  What we found in practice is that the nominal rate can fall below zero without triggering a flight to cash.  Essentially, banking services—security and the ease of transferring liquidity for payment—have some value and thus overcame the negative rate issue.  We tend to think the lowest one can go is -75 bps, but that is merely an observation on our part.  However, we have seen that negative nominal rates are a significant penalty to banks.  Banking is a spread business; banks perform a duration transformation, taking short-duration liabilities and turning them into long-duration assets.  Flat yield curves undermine bank profitability as do the levels of rates themselves.  Thus, negative nominal rates and flat curves are terrible for banks.  According to reports, the ECB is rethinking its negative nominal rate policy due to the adverse effect it has had on banks.[8]  If the ECB reverses, it would likely be supportive for Eurozone banking.

Acknowledging weakness in Europe: The European economy is struggling.  Germany’s five leading economic institutes have lowered their GDP forecasts by nearly 50% compared to September.  They now project growth of a mere 0.8% this year for Germany compared to the 1.5% forecast developed in Q3 of last year.[9]  Italy also reduced its growth forecast to 0.3% this year, down from the initial forecast of 1.0% made in December.  This action would boost the deficit-to-GDP level to 2.3% from 2.0%.  Unfortunately, due to the fiscal “straightjacket” of the Eurozone’s government spending rules, the only stimulus available is either from the ECB, which may be exhausted, or through a weaker EUR.  Although we remain dollar bearish, economic weakness in Europe remains a concern.

The chart below shows the yearly change in the OECD’s leading indicator for the Eurozone, with the gray bars showing Eurozone recessions.  Although we are not in recession territory quite yet, the slowdown is unmistakable. 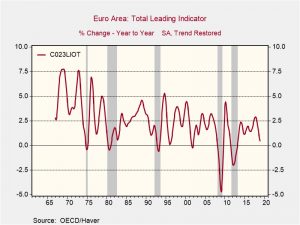 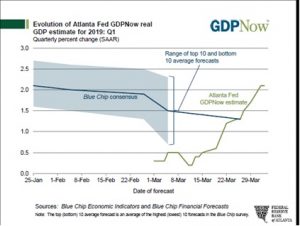 This model is now projecting 2.1% growth, up from 0.2% in early March.  Here is the contribution table. 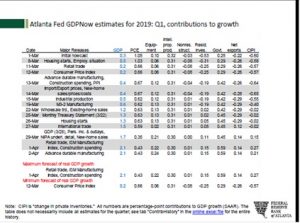 Inventory rebuilding, some modest recovery in consumption and a rise in government spending are all combining to lift Q1 GDP estimates.  Since there has been a tendency for Q1 to be affected by adverse seasonal adjustments, this level of growth would likely signal GDP somewhere between 2.5% to 3.0% this year.

This is the seasonal pattern chart for commercial crude oil inventories.  We would expect to see a steady increase in inventory levels that will peak in early May; the pattern coincides with refinery maintenance.  Even with the build this week, the market is well behind normal which is supportive for prices. 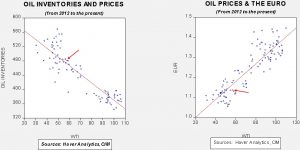 [4] https://www.politico.eu/newsletter/brussels-playbook/politico-brussels-playbook-presented-by-naftogaz-of-ukraine-dining-with-a-dictator-sweating-over-china-is-it-brexit-yet/?utm_source=POLITICO.EU&utm_campaign=b8f54c4fc3-EMAIL_CAMPAIGN_2019_04_04_04_53&utm_medium=email&utm_term=0_10959edeb5-b8f54c4fc3-190334489 (see the “next big thing”)