[Posted: 9:30 AM EDT] Risk markets are down this morning on continued trade worries.  Here are the key items we are watching this morning:

Trade wars: The U.S. announced tariffs on $50 bn of Chinese imports[1] and China responded in kind.  Goods included in China’s tariffs include most of the grains, so soybeans, corn, etc. are sharply lower this morning.  Fear in the financial markets is palpable.  However, the fear factor is more based on continued escalation, not what was actually announced yesterday and this morning.  The proposed tariffs open up 60 days of negotiations.  We fully expect that any tariffs actually implemented will probably be less than what have been announced over the past few hours.  In other words, these announcements are the opening salvo in broader negotiations. United States Trade Representative (USTR) Lighthizer is a seasoned trade negotiator and seems to have the confidence of POTUS.  Thus, we believe it is too soon to panic.  China has shifted from attacking exports of blue states (California almonds) to red states (Iowa pork, corn and soybeans).  This will raise political opposition in the U.S. to the tariff proposals.

It is important to remember that the White House’s ultimate goal probably isn’t merely a drop in the trade deficit.  After all, that would be quite easy to implement.  Just trigger a recession, which cuts consumption, reduces imports and, lo and behold, cuts the trade deficit. 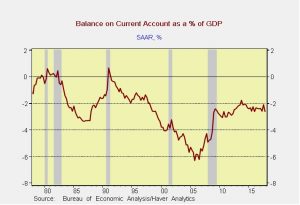 This chart shows the current account (trade + remittances) as a percentage of GDP.  Note that in every recession, the current account either shifts to a surplus or the deficit narrows.  No politician wants this outcome; what is really desired is job growth.  The president should want export growth.  A better tool for this would be dollar weakness. 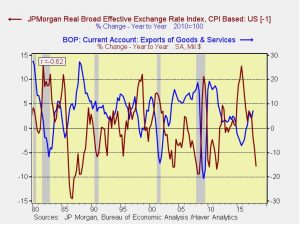 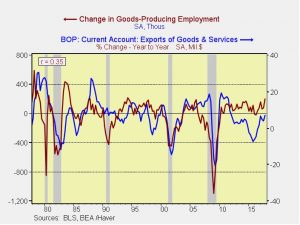 The real issue is boosting market access to China—an obvious way to get there is with a weaker dollar/stronger Chinese yuan.  This is the path the Reagan administration took during the 1980s with the yen and D-mark at the Plaza Accord, in which Lighthizer participated.

We do not want to be overly sanguine on this topic.  The president is mercurial and could stumble into an open trade war.  However, we are not in one now and there is a mostly clear path to avoid one.  China has used a mercantilist trade policy to foster development.  Most nations do this—the U.S. could have been accused of similar practices 150 years ago.  But, a point is reached where such policies become counterproductive.  The U.S. ran into this issue in the 1930s, as did Japan in the late 1980s and Germany in the mid-1980s (although Germany was able to maintain such policies via colonization, otherwise known in polite company as the Eurozone).  China is at that point now.  It under-consumes, is over-indebted and needs to rebalance by reducing debt and investment and boosting household consumption.  Chairman Xi has accumulated massive political power; if he wants to restructure China’s economy, he has the power to do so.  A stronger CNY would assist in that process.

It should be noted that other nations are beginning to understand that U.S. trade policy is going to affect them as well.  South Korea’s revamped trade deal with the U.S. will require a stronger won.  Japan is increasingly concerned that the U.S. is going to demand a stronger yen and a reversal of Abenomics.[2]  Perhaps the clearest signal we are getting is that the U.S. wants dollar weakness.  If so, that is usually bullish for foreign equities (to dollar-based investors, obviously).

Thus, the bottom line is that although risks are elevated, a full-scale trade war remains in the “tails” of the distribution.  The most likely outcome is a negotiated trade deal that increases foreign investment in the U.S., opens markets abroad and brings a weaker dollar.  We remain concerned about a policy error, but it is too early to declare that one has occurred.

Williams at the NY FRB: Despite calls for diversity, in the end, the NY FRB selected John Williams as its next president.  We suspect that the need to add a strong economic mind to the roster of permanent voters on policy outweighed other concerns.  We would not be surprised to see a more regulatory oriented replacement for Williams at the San Francisco FRB.  We rate Williams as more hawkish than Bill Dudley, who is leaving the NY FRB president positon in mid-June, so the FOMC just got a bit more hawkish.

[1] This actually clears up one serious concern, which was whether it would be $50 bn in tariffs, which would be huge, or tariffs on $50 bn of goods, which is roughly 9.5% of Chinese exports to the U.S.