[Posted: 9:30 AM EDT] It’s another quiet and mostly sluggish day in global markets.  The French are holding a presidential debate today at 8:40 pm local time (2:40 EDT) that will be closely watched.  Current polling hasn’t changed; Le Pen and Macron will likely win the first round and the latter should win easily in the runoff.  However, given the mixed performance of polling in recent elections, there will be some degree of concern until the runoff is held on May 7.  The first round will occur on April 23. 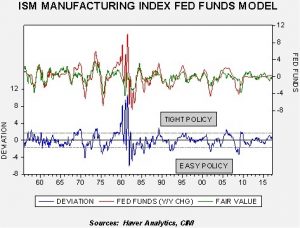 The model compares the yearly difference in fed funds to the ISM manufacturing index; the index leads fed funds by six months.  Given the time adjustment, this model would project one more rate hike by the end of Q3.  Assuming the economy holds recent gains, the model’s forecast would be consistent with three hikes for the year.  It also suggests that the FOMC isn’t “behind the curve” as the Phillip’s Curve-based models indicate, such as the Taylor and Mankiw Rules.

We continue to closely monitor the situation in North Korea, especially with Chairman Xi visiting the president in Florida.  NBC carried a long interview[1] with Thae Yong Ho, the former Democratic People’s Republic of Korea (DPKR) deputy ambassador to the U.K.  Ho warned that the “world should be ready” for some sort of missile attack from the Hermit Kingdom.  Adm. Stavridis (Ret), former NATO commander, suggested the current situation is unusually dangerous.  First, Kim Jong Un’s grip on the DPKR appears unstable, which accounts for his brutal purge.  Second, there is political instability in South Korea due to the impeachment of its president.  Third, the Trump administration appears to be aggressive in its tactics with North Korea.  Ho suggested that the “young marshal” is capable of anything and his removal from office is the only way to ensure peace.  It is rather obvious that the markets are not discounting any degree of flare-up on the Korean peninsula; if they were, the JPY would be significantly weaker because Japan would be a likely target.  We view Korea as a “gray swan”; it is a known/unknown, but the degree and timing are uncertain.