[Posted: 9:30 AM EDT] We are seeing a bit of a recovery this morning after a hard sell-off yesterday.  Here are our thoughts:

This is mostly about technology: Tech companies have, until recently, had a reputation for good.  Their goal seemed to be to improve our lives at apparently low cost.  That reputation has taken a beating in recent months.  The social media model is one element of the problem.  These firms seemingly offer their products for free but, in reality, they are platforms to watch us, foretell our future behavior based on past actions and sell this information to advertisers.  The power of this information is, as it turns out, extensive.  Not only can it be used to direct us to items we might want to purchase, but it can shape our opinions on politics and social factors.

Steadily, we are being warned of the potential and real dangers posed by this data gathering.[1] The influential and powerful are trying to harness this data to shape the world in their image.  How this situation is resolved is unknown.  However, it is apparent that the industrialized world’s citizens are beginning to realize these tech companies and what they provide are not necessarily benign, and that there is a cost to convenience.

The U.S. has faced similar issues before.  In the 1890s, it was becoming evident that the industrial trusts were reaching levels of concentration to where they represented the market.  In other words, price, the method by which market economies match supply and demand, was becoming so controlled on one side that price no longer worked for creating an ideal distribution of goods and services.  This is how anti-trust law was born.  The concentration of data is different in many ways.  Unlike price, which is obvious, the value of our personal data is not clear.  Thus, there is grave danger that we are undervaluing our personal data and tech companies are illicitly capturing value because of our ignorance.  Essentially, they are monetizing our behavior without compensating us.  In the political sphere, we are at risk of being manipulated—being fed simplified outrage to capture our vote.  At least the old party machines used to pay people for their votes!

The uncertainty the market faces is how the political class will regulate the data accumulators.  When the trust-busters broke up the large industrial firms in the early part of the last century, it turned out to create value.  The smaller firms were better managed, the competition encouraged their growth and they provided ample services to the economy.  A similar outcome is possible today.  But, until we understand the landscape, the current dominant firms will be under fire and this will likely increase the volatility of their price performance in the coming months and years.  We suspect this situation will be part of the environment for a long time.  It’s important to remember that the Sherman Anti-Trust Act passed in 1890, but Standard Oil wasn’t broken up until 1911.

Equities and the Fed: A question we are getting from advisors is whether market weakness will delay or stop Fed tightening?  This is really a question about the “Fed put,” which captures the central bank’s reactions to market declines by easing monetary policy.  Greenspan did cut rates after the 1987 crash and there is an obvious pattern to rate cuts during financial crises, which are usually accompanied by equity market declines.  So far, we aren’t seeing evidence from the interest rate markets that the FOMC should change behavior.  Expectations from fed funds futures still show an 80% chance of a rate hike at the June meeting, and Eurodollar futures say the FOMC has at least another 100 to 125 bps of tightening. 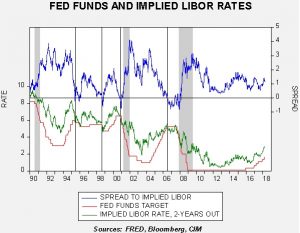 This chart shows the implied three-month LIBOR rate, two years deferred, from the Eurodollar futures market and the fed funds target.  The Fed tends to raise rates until the two rates cross.

So far, financial authorities and the interest rate markets are treating this equity pullback as a normal correction.  Given the lack of evidence of a recession, that is a logical conclusion.  Thus, until proven otherwise, that would be the prudent expectation.