[Posted: 9:30 AM EDT] BREAKING: There was a bombing on a St. Petersburg subway that has killed at least 10 and injured 50.  This is still a developing story.  Thus far, no group has claimed responsibility.  With the recent widespread protests (according to reports, nearly 100 cities have seen some degree of organized protests), we will be watching to see if Putin tries to accuse the protestors of this attack.

The big event this week is Chairman Xi’s visit to the U.S.  He will be with the president in Florida.  In a wide-ranging interview over the weekend with the FT, Trump made it clear that the trade deficit with China will be a key topic of conversation. 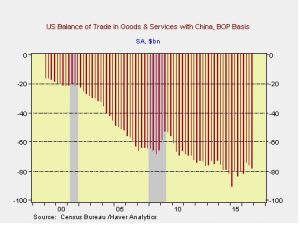 The bilateral trade deficit was $78.3 bn in Q4; last year, it was $309.8 bn.  For comparison’s sake, the deficit last year with the EU was $92.3 bn.  It isn’t clear what these negotiations will bring.  If we were consulting with Chairman Xi, we would recommend he make expansive promises to engage in direct foreign investment in the U.S. to build plants and equipment.  The promise of manufacturing jobs would probably be enough to forestall punitive tariffs.  We also expect Xi to be supportive of the president’s family business ties to China.

There has been a spate of articles over the weekend on the growing role of Jared Kushner in the White House.  The son-in-law has been given a broad portfolio, including streamlining government, handling relations with China and Mexico and solving the Middle East.  A Politico article[1] suggests that Kushner may be cooling on Bannon, who had made a point to befriend Kushner early in the election process, likely perceiving his influence.

According to this and other reports, Kushner is increasingly siding with the establishment, becoming more closely aligned with Gary Cohn.  Another Politico article[2] indicates that the White House is planning its own tax reform measure, having decided that relying on Ryan and Congress reduces the president’s control over the process.  Reports suggest that the controversial border adjustment tax (BAT) won’t be part of this measure.  Details are clearly scarce but killing the BAT will leave a large fiscal hole.  Our read is that the president doesn’t really care about deficits and will likely lean on the OMB (which will create a different narrative than the CBO) to dynamically score the tax proposal by goosing growth.  Lifting the deficit will be controversial; the most likely outcome is that it will be bearish for long-duration fixed income.

Finally, on the geopolitical front, there were two items of note.  In the FT interview, President Trump indicated that the U.S. is willing to “go it alone” on North Korea.  It isn’t clear if that means just sanctions or if military action is being considered.  None of the military sites we monitor are suggesting a U.S. military mobilization against North Korea.  We suspect this is a negotiating ploy to woo China into punishing the Kim regime.

Second, in comments that seemed to come out of the 16th century, a former Conservative leader, Lord Michael Howard, suggested that PM May would be willing to “go to war” against Spain in Gibraltar.  Spain lost control of Gibraltar at the 1713 Treaty of Utrecht; voters on “the Rock” are strongly British, voting 18,000-187 on shared sovereignty with Spain.  Spain has indicated it would veto any favorable measures for the U.K. during Brexit unless Britain gives up Gibraltar; given that all 27 nations must agree on Brexit, this veto threat is real.  Although it is hard to imagine a hot war developing over this issue, as we have noted numerous times, the EU/NATO project was all about preventing war in Europe.  The tenor of this spat shows those issues remain despite over 70 years of peace.