[Posted: 9:30 AM EDT] Happy Monday!  It was a cold weekend in the Midwest, with a late April snow for the upper parts of the nation’s midsection.  It’s going to be a busy week, with the FOMC meeting and Japan’s Emperor Akihito taking the rare step of abdication tomorrow.[1]  Here is what we are watching:

Spanish elections: Pedro Sanchez’s Socialist Party had a good election, a rarity for center-left parties in the West.  Although the Socialists will still need to build a coalition government, the party did take 123 of the 350 seats in the Spanish Parliament; that was up from 85 seats in the last government.  The center-right opposition Popular Party took 66 seats.  The centrist Ciudadanos won 57 seats, and the hard-left Podemos won 42 seats.[2]  Vox, the right-wing populist party, took a surprising 24 seats, the best performance for a hard-right party in Spain since 1982.[3]  It will still take weeks for Sanchez to form a government, but there isn’t another alternative to a return of his government.  The election is supportive for the Eurozone and the EU as it shows that a centrist party can still win elections in the region.

Fed: The FOMC meets this week.  There will be talk of an “insurance cut,” a rate reduction to “ensure” the expansion continues.  This won’t happen on Wednesday but expect the chair to be noncommittal on this issue in the press conference.  There are no dots or new forecasts at this meeting but, consistent with the Fed’s new policy, there will be a press conference.  The key issue for the FOMC is falling inflation.[4]  Chicago FRB President Evans suggested that inflation around 1.5% could trigger a rate cut.[5]  Although the insurance cut and rate reductions due to inflation will likely dominate the discussion, we would not expect a move this week.  In fact, with the early June summit on the inflation mandate, we probably won’t see a rate move before that meeting unless the economic data turns decidedly bad or a financial accident occurs.

China trade talks: Talks resume this week in Beijing as negotiators near an agreement.[6]  Still, there are difficult issues that remain to be worked out,[7] with enforcement of the agreement one of the areas that remains unresolved.[8]  It does appear President Trump and General Secretary Xi are planning a June signing ceremony in the U.S.[9]  The financial markets have mostly discounted an agreement with China, although we would not be surprised to see further gains if a deal is completed.

Japan trade talks: Although President Trump has expressed some optimism that a Japan/U.S. trade deal may be coming soon, PM Abe has refused a key component of U.S. demands, an end to agricultural tariffs.[10]  Abe faces local elections later this year and giving in on agriculture would put Abe’s party at risk.  Paradoxically, Abe did consume a significant amount of political capital to reduce agricultural tariffs as part of TPP.  Thus, the other nations in the agreement now have better access to Japan’s agricultural markets compared to the U.S., which refused to join the agreement.[11]

Growing tensions in the South China Sea: The U.S. has put China on notice that it will no longer tolerate aggressive actions at sea by China’s fishing fleet and its coast guard.[12]  China has been expanding its power in the region by using these two factors to expand its influence.  Traditionally, navies have less aggressive terms of engagement with non-military vessels.  China has used this practice to its advantage, using the coast guard and fishing fleet to project power.  By putting out this notice, the U.S. Navy is signaling to China that the U.S. will treat fishing vessels and coast guard ships with the same protocol as official Chinese naval vessels.  We also note that the U.S. sent two warships through the Taiwan Strait yesterday as a show of force.[13]

Iran oil sanctions: The Trump administration is holding fast to its position on Iranian oil waivers, indicating that a hard stop will be enforced on May 1.  In other words, there will be no grace period for winding down transactions with Iran.[14]  Meanwhile, President Trump has renewed his call for OPEC to boost production to offset the loss of Iranian crude.[15]

African Swine Fever: There are reports that the deadly African Swine Fever[16] has moved into North Korea.[17]  The virus, which does not directly affect humans, is deadly for pigs, with a very high fatality rate.  It has already adversely affected China’s massive pork industry and reports indicate it may be in Eastern Europe as well.[18]  It hasn’t been reported in the U.S. yet, but agriculture security officials are very concerned about the virus entering North America at some point.  The virus is a bearish factor for grains but has sent pork prices soaring.

Is a sacred cow on the block?  A decade ago, Germany implemented a fiscal rule that makes it nearly impossible for the country to run fiscal deficits.  This decision, coupled with high private sector net saving, has led to Germany running a massive trade surplus.  At long last, it appears there may be some cracks developing in support of the fiscal rule.[19]  The rule has curtailed public investment and Germany’s infrastructure has suffered over the 10 years it has been in place.  Germany needs to bend on this issue.  Its economy has become very dependent on exports. 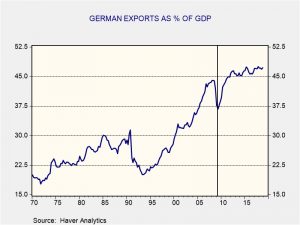 On the above chart, we have put a vertical line representing the onset of the fiscal law.  Since implemented, the trade surplus has continued to increase.[20]  Germany’s current account surplus represents about 7.5% of its GDP, one of the highest in the world.  Expanding its fiscal deficit should reduce that surplus and boost growth for the rest of the Eurozone.

S&P on Italy:Standard and Poor’s left everything unchanged by maintaining the BBB rating on Italy’s sovereign debt along with the negative outlook.  So, the good news is that a crisis was averted; the bad news is that nothing has been resolved.