[Posted: 9:30 AM EDT] The market-making news overnight was that the BOJ announced no new policy measures at its meeting.  Although this was mostly anticipated, there were hopes that Governor Kuroda would offer at least some support for the economy.  Instead, he suggested he is taking a “wait and see” approach to see if NIRP and other measures begin to bear fruit.  Clearly, the financial markets were disappointed.

This is a three-day, three-minute chart of the major Japanese stock index.  The market broke hard on the news.

The currency jumped 3% from Tuesday’s close.

There is much speculation on why Kuroda didn’t act.  Some are arguing that he is trying to press PM Abe into doing more with fiscal policy; by dragging his feet on more monetary stimulus, he is putting pressure on the government to act.  Although this may be the case, history shows that when monetary policy officials try to pressure elected officials, the latter usually win.  That’s because, even with central bank independence, a central banker gets his mandate from some elected official.  The other possibility is that Kuroda may be wondering if monetary policy is reaching its limit.  The impact of NIRP has been mixed at best.  Although rates have declined, the appreciation of the JPY has mitigated much of the positive bounce from falling rates.  The BOJ may be at a point where the last remaining policy tool is direct debt monetization (“helicopter money”), which probably can’t be implemented without government support.

The FOMC statement didn’t contain any serious surprises.  The committee noted that the labor market has shown improvement but the overall economy looks sluggish.  About the only serious surprise was that the comment about global economic and financial developments posing risks was dropped from the statement.  This may not mean much; later in the statement, it was noted that developments overseas will be “closely monitored.”  KC FRB President George dissented, as expected.

We have speculated that the Fed may be using a de facto currency target as part of its policy mix.  Although this would never be admitted in public (it’s outside the Fed’s policy mandate), it is impossible to argue for steady policy using virtually all the permutations of the Phillips Curve that we monitor.  Perhaps dropping the foreign risk statement is an indication that the Fed is comfortable with a 110ish JPY/USD and a 1.1300ish EUR/USD.  Or, this may be reading too much into a short statement.  Although pundits continue to suggest that the statement allows for a June hike, we doubt that will occur.

Oil prices continue to rally, exhibiting the characteristics of a bull market.  For the past two weeks, any bearish news has been met with buying, suggesting there is money on the sidelines looking to take advantage of pullbacks to establish long positions.  The market bounced back from a very bearish meeting in Doha and held gains after the API reported a stock draw that was contradicted by the official data from the DOE. 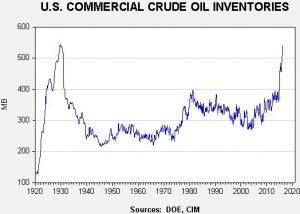 However, inventories are clearly lagging the usual seasonal pattern. 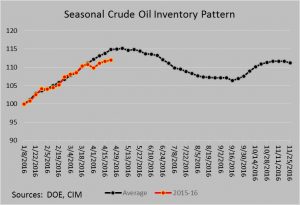 On average, we are near the seasonal peak and should begin to see stock draws going forward as the summer vacation season gets underway.  Based on current inventory levels and the EUR, the average monthly price for WTI (which is currently $40.61) is a bit overvalued; our model puts the fair value price at $38.84.  However, the current price is rich.  Assuming a stable EUR, the current price of around $45.25 is consistent with inventory levels of 502 mb, implying a stock draw of nearly 40 mb, or about 7.0% from current levels.  Assuming the last data point represents the peak week, a normal seasonal storage decline puts the low at 500.5 mb by the third week of September, which calculates to a fair value price of $45.25 per barrel.  Essentially, the market has already discounted a lot of bullish news and further price strength could lead us into overvalued territory unless stock draws are much more than normal.  This isn’t to say we are bearish, but we wouldn’t be surprised to see a flat market develop in the coming weeks.

Finally, it appears that Greece is becoming a problem yet again.  Greek PM Tsipras has been requesting a summit meeting with Eurozone officials, asking for an easing of terms to receive promised aid.  Donald Tusk, the current president of the European Council (which represents the 28 nations of the Eurozone), has only agreed to a meeting of finance ministers, who generally cannot change terms to an existing arrangement.  Greece faces a €3.5 bn loan payment in July and it doesn’t look like it will be able to make it.  In addition, Tsipras is struggling to make other reforms demanded by creditors.  Although this situation should be manageable, problems could escalate as we head into the Brexit vote in mid-June and new Spanish elections in late June, the outcomes of which could reduce the policy “bandwidth” available.  Thus, we may be heading into a series of Eurozone issues as summer nears.