[Posted: 9:30 AM EDT] It’s FOMC Day!  As we noted earlier this week, we don’t expect any major news today.  The key focus will be on the idea of “balance of risks.”  The Fed often puts a note in the statement about the balance of risks.  In general, it leans toward inflation, recession or balanced.  If inflation is a concern, the committee is likely leaning toward rate hikes.  If recession is a concern, the Fed is likely moving to ease.  If it’s balanced, assuming the Fed is at the neutral rate, no change in policy would be expected.  However, the key to this issue is the neutral policy rate.  As we have demonstrated using the Mankiw Rule, if the Fed is relying on the Phillips Curve to determine the neutral rate then it is well behind the curve and needs to be raising rates.  Thus, if risks are said to be “balanced,” this would suggest rate hikes will be coming soon.  However, if the committee is looking at other factors for policy guidance, such as the dollar, then it may feel it is already at a neutral rate (the Fed’s behavior could arguably suggest this) and calling risks balanced should have little effect on the markets.  Overall, we suspect the financial markets would be spooked by the Fed describing the current risk environment as “balanced” and we would likely see selling develop in risk assets.

The BOJ meets tomorrow.  Again, nothing is expected here either, except that the JPY strength is hurting the bank’s attempts to boost the economy.  Although we don’t expect much at this meeting, we would not be surprised to see a good bit of “oral intervention” in a bid to weaken the JPY by promising to take more aggressive steps to boost the economy.

Oil prices, basis WTI, broke above $45 per barrel this morning after the American Petroleum Institute (API) said oil inventories fell last week.  The API data are not the official numbers; those will be released by the DOE at 10:30 EDT.  In general, the two data sets tend to track each other but have, on occasion, diverged, so the government data will need to confirm yesterday’s API data in order to hold current levels.  We will have more analysis on the oil data tomorrow.  However, it is interesting to note that the tight correlation between oil and the S&P 500 is breaking down somewhat. 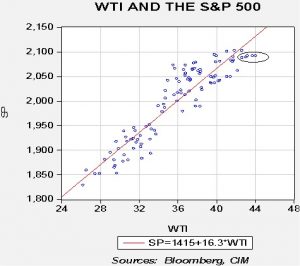