[Posted: 9:30 AM EDT] It’s GDP day!  We cover the numbers in detail below, but our quick take is that the data was much stronger than expected, coming in at 3.2%, well above the +2.3% forecast.  Here is what we are watching:

Disappointing Japan: Although inflation was modestly higher than expected, the decline in industrial production was unsettling. 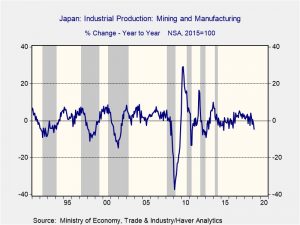 This chart shows the yearly change in industrial production.  The gray bars indicate recessions in Japan.  Although March’s decline of -4.6% isn’t necessarily a clear signal of an impending downturn in Japan, any further weakness increases the odds that the country is entering a downturn.

S&P on Italy: Standard and Poor’s is expected to issue an update on its BBB rating on Italy’s sovereign debt.  In October, the rating agency maintained this rating, just above “junk,” but also indicated it had a negative outlook for the country.  Although we would be surprised to see S&P cut Italy below investment grade, such an action isn’t out of the question and would lead to significant market turmoil.[1]

Spanish elections: Spain’s voters go to the polls on Sunday for what will likely be an inconclusive election.[3]  Although the current PM, Pedro Sanchez, is expected to remain in power, it may take weeks of coalition-building before a government will form.  Until recently, Spain was a stable two-party system, with a center-left and center-right party holding court.  But, this stability has fractured over separatism (Catalonia, Basque) and economic issues.[4]  All eyes will be on a newly emerged hard-right party, Vox, which has been rising in the polls.  Vox is expected to receive around 10% of the vote.[5]

China trade talks: There are numerous reports that President Trump and Chairman Xi are planning to meet soon to finalize a trade agreement.[6]  Chairman Xi is expected to travel to the U.S. for the signing ceremony.  China has been worried about last-minute changes to the agreement at the time the leaders meet, so we expect the meeting won’t take place without solid guarantees that such changes won’t occur.

OBR: Chairman Xi promised that “one belt, one road” financing will be less onerous in the future and that corruption concerns will be addressed.[7]  The plan is also looking for financing from third parties, suggesting that China may be having second thoughts about the credit risk it is undertaking.

Brexit: Talks with Labour are apparently going nowhere and PM May has pulled her exit program from a vote.[8]  It looks like the U.K. will still be part of the EU for the upcoming European Parliament elections next month, much to the chagrin of all involved.  Although we don’t expect anything to happen in the near term, it is looking increasingly as if all parties will drift into October without a deal and a hard break is becoming more likely.

Japan and monetary policy: Treasury Secretary Mnuchin has made it a point during trade negotiations to include restrictions on currency depreciation.  His concerns are well founded—one of the reasons that tariffs became less common was that in a floating currency environment countries could easily offset the impact of tariffs through currency depreciation.  Comments about a return to the gold standard by some Fed governor candidates is, in part, tied to this issue.  Therefore, we noticed with interest that Japan’s Finance Minister, Taro Aso, indicated Japan would not consider tying monetary policy to current trade discussions.

There was a seemingly unspoken arrangement among central bankers that unorthodox monetary policy, e.g., negative rates, zero rates, quantitative easing, would only be tolerated if the express purpose was for domestic economic support but not for competitive depreciation.  In reality, those practices tended to bring currency weakness. 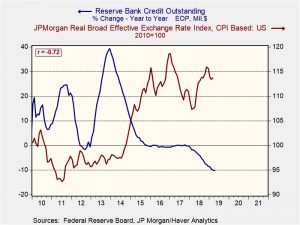 Since 2010, the dollar was tightly correlated with the yearly change in the Fed’s balance sheet.  During QE, there was widespread criticism of the practice, especially by emerging economy central bankers, fearing the U.S. was forcing adjustment on their economies through the weaker dollar.

Taro’s comment is important; if the U.S. begins to press foreign nations to abandon unconventional monetary practices due to their effects on foreign exchange, it will severely restrict these nations’ abilities to conduct independent monetary policy.  Of course, the whole point of the gold standard was to place some degree of restriction on the actions of central bankers and governments.  That’s why we don’t expect a return to such a program, and it should be noted that returning to a gold standard would, at some point, lead to deflation.

We expect the Trump administration to eventually realize that the most important tool it has available is a weaker dollar.  Such a deliberate policy would likely need some degree of Fed cooperation but, given how aggressive the president has been with the Fed, cooperation could likely be delivered.  Like Reagan in his first term, there was a seeming problem with the idea of “weakness” in any policy; however, as we saw with the Plaza Accord in the second term, policy can change.  If the goal is reflation, a weaker dollar is a useful tool.

Crypto in trouble: The NY attorney general has made allegations against two firms, Tether and Bitfinex, alleging they participated in a cover-up to hide losses up to $850 mm.  Both firms have been under scrutiny for some time but if the legal process moves forward then it will likely undermine the entire cryptocurrency complex.[9]