[Posted: 9:30 AM EDT] At 1:30 EDT, the White House is scheduled to release its tax proposal.  There is quite a bit of speculation about what we will get from this announcement.  Current “leaks” suggest a 15% tax rate for corporate taxes, including owner-operated firms, and a reduced rate for repatriation.  There is also talk about changing the code for individual taxes too, including a larger tax credit for child care and a higher standard deduction.  However, beyond the announcement effects, probably little comes from this.  Democrats won’t support it and it isn’t even likely that it would get enough GOP votes in the House due to the proposal’s lack of revenue offsets.  There will be talk of dynamic scoring to raise revenue but that will be a stretch.  Even using the tactic of reconciliation, which would eliminate the filibuster, is probably not possible because of the lack of revenue offsets.

There is great speculation that this is simply the opening salvo in a bargaining position.  We tend to agree with this stance.  So, if this is the opening position, what would need to happen in order to get a deal done?  First, it appears that a revenue raiser would be necessary.  The border adjustment tax (BAT) appears dead but it wouldn’t shock me to see it resurrected.  The BAT is controversial.  Retailers hate it; exporters cheer it.  But it would raise revenue.  However, it would also likely send the dollar higher.  The BAT won’t gain any support from the Democrats.  Although it’s a long shot, James Baker’s proposal of a carbon tax[1] coupled with a major cut in tax rates might gain support from the Democrats, but it would not be popular with non-establishment Republicans.  Of course, one could get the necessary offsets by cutting spending.  However, Congress is so divided that the only way to cut spending would be to use a sequester mechanism of across-the-board cuts.  Given the White House’s goal of boosting defense and leaving entitlements untouched, cuts will be difficult.

The takeaways from this opening proposal are the following: 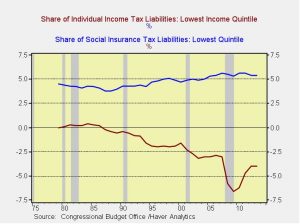 This chart shows the share of tax liabilities paid by the lowest 20% of households.  Due to the earned income tax credit and other exemptions, the bottom 20% receive money from the income tax system, so tax cuts to this group are not meaningful.  On the other hand, this quintile pays 5.4% of the Social Insurance tax.  So, raising the cap on Social Security earnings might be an offset.

Any talk of cutting corporate taxes is bullish for equities and the dollar and bearish for Treasuries.  However, talk without a reasonable path to policy changes won’t have much of a lasting effect.  In other words, at some point a deal must be struck and market disappointment will rise without it.  For now, we will be watching this afternoon’s announcement with everyone else to see what is proposed.