[Posted: 9:30 AM EDT] It’s another mostly quiet morning as a plethora of earnings are released.  Here is what we are watching: 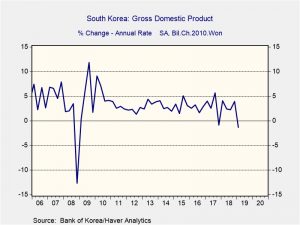 Weak investment spending led to the unexpected slowdown.  Although exports were weak, on a net basis, they were offset by soft imports as well.  The decline in South Korean growth is further evidence of a global slowdown.

Central bank news: The BOJ left policy unchanged[1] despite lowering growth and inflation forecasts for 2020.  Its primary response to the downgrade was forward guidance, indicating it would not consider raising rates until next year.  At the same time, Governor Kuroda signaled that no new stimulus measures would be considered.  The PBOC indicated that policy is on hold, responding to speculation that additional easing is coming.[2]  The BOE is beginning the process of selecting a new governor.[3]  Carney will be leaving his post next February.  Carney has been controversial, angering Brexit supporters by forecasting an economic downturn if the U.K. leaves the EU without a trade arrangement.  Although not in today’s news, ECB President Draghi will leave office in the fall and we expect that EU leaders will announce his successor in June.  From a market perspective, the key is “anyone other than Jens Weidmann” of the Bundesbank.  Weidmann is considered an extreme hawk and would be less likely to support unconventional policy if the Eurozone runs into debt issues.[4]  If he gets the nod (and Berlin is thought to be supporting him in this role) we would expect at least a temporary jump in the EUR.

OBR: The “one belt, one road” foreign investment program (or, as we like to refer to it, “the Chinese imperial project”) is holding meetings in Beijing at the Belt and Road Forum.  Dozens of nations have sent representatives to the meeting, indicating the interest in gaining access to Chinese infrastructure funding.  China is taking steps at this meeting to address criticism that the projects saddle countries with high debt.[5]  The U.S. has not moved strongly against the project yet, but it clearly has the attention of Washington.

Turkey: The central bank dropped references to further policy tightening and admitted that currency reserves fell $1.8 bn last week.  Although official foreign reserves are $26.9 bn, if drawn swap lines are removed, reserves are closer to $14.9 bn.  In February, Turkey’s goods and services imports were around $16 bn, so Turkey is in a precarious position without swaps.  At the same time, it’s important to note that Turkey sits in a geopolitically sensitive area.  It can likely “encourage” EU support by “discussing” the flow of refugees, and can play the West off Russian or Iranian influence.  We are always worried that Erdogan will overplay his leverage but that doesn’t mean the leverage doesn’t exist.

Argentina: Unlike Turkey, Argentina sits at the end of the world.  It isn’t geopolitically important and thus has to fend for itself.  Borrowing costs have jumped and credit default swaps have reached 1200 bps, making it the world’s second most risky sovereign borrower (with Venezuela in the top spot).  Remember that century bond issued in 2017?[6]  It’s trading at 70 cents to the dollar.[7]  The Macri government announced a price freeze on 60 items in a bid to bring inflation under control.  Spooking investors are the looming elections on October 27 and the increasing likelihood that the infamous Kirchners will return to power.  The latest polls indicate that Cristina Kirchner holds a four-point lead over the incumbent.  The Argentine peso has been under pressure.

Brexit: The leadership challenge against PM May failed.[8]  There is no evidence of progress on talks with Labour.  However, a major looming threat did emerge to the U.K. as Scotland’s First Minister Sturgeon indicated she will take steps to hold another referendum on leaving the U.K. if Brexit occurs.[9]  We suspect this one might pass.

Putin’s trash problem: The late congressional leader Tip O’Neill was credited with the quote that “all politics is local.”  No matter how powerful the office, basic public goods must be provided by officeholders.  Mayors in major U.S. cities have lost elections over potholes and snow removal.  In Russia, protests have broken out against the creation and expansion of open-air landfills, which are estimated to be four times the size of the island of Cyprus.[10]  Although we doubt this will bring down the government, as noted above, other politicians have fallen from power for less.

GDP: The first report of Q1 GDP will be released tomorrow.  Here is the Atlanta Fed estimate. 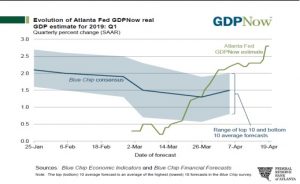 The current forecast is for 2.8% growth.  The Bloomberg consensus is for 2.2% growth.  Here are the Atlanta FRB’s contributions to growth estimates.  Inventory rebuilding and improved net exports have lifted their growth estimates over the quarter. 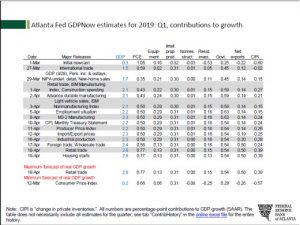 This is the seasonal pattern chart for commercial crude oil inventories.  We are nearing the end of the spring build season and will probably not achieve average, although the gap has narrowed significantly in recent weeks.

Had it not been for the rise in imports, we would have likely seen a decline in inventory levels. 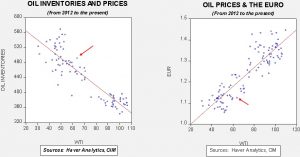 Based on oil inventories alone, fair value for crude oil is $53.98.  Based on the EUR, fair value is $52.22.  Using both independent variables, a more complete way of looking at the data, fair value is $51.91.  This is one of those rare circumstances when the combined model fair value does not lie between the estimates from the two single-variable models.

Current prices are running well above fair value.  Geopolitical risks, including the unrest in Libya, continued problems in Iraq and the end of Iranian oil export waivers, are lifting prices.  However, our data does suggest that the markets are getting a bit rich and evidence that any of these situations are improving will likely lead to at least a period of consolidation, if not a pullback, in prices.  We note that some Russian crude oil has been rejected by refineries due to contamination.[11]  Given tight supply conditions, such news is important and has lifted prices this morning.