[Posted: 9:30 AM EDT] Equity market weakness continues this morning after a sell-off yesterday.  The dollar is rising, boosted by the 10-year T-note definitively breaking 3%.  Here is what we are watching this morning:

Did Macron save the Iran deal?  Probably not.  Although it isn’t obvious what “plan B” is if the U.S. kills the agreement, President Trump seems inclined to do so.  We view the Iran deal as flawed.  It doesn’t cover Iran’s missile program or its covert actions in the region.  In other words, it is limited to the nuclear program and it only delays its progress.  However, it has been our position that President Obama viewed the deal as a first step in normalizing relations with Iran to anoint Tehran as the regional hegemon so the U.S. could shift its focus to the Far East.  When Clinton lost to Trump, that extension became impossible (and there is little evidence to suggest Clinton would have followed Obama’s path anyway).  Still, by all accounts, Iran is living up to the letter of the agreement.  So, why end it?  In part, the president’s base loves it whenever Trump kills an Obama era policy.  On the other hand, if the problem is Iran’s behavior in the region then addressing that issue would make sense.  To some degree, Macron also pressed Trump to keep a military presence in Syria.  If the U.S. really wants to curtail Iran’s behavior, it should put more military assets in Iraq and Syria, ally with Turkey and break the “Shiite arc” that is being built from Iran to Lebanon.  However, that policy move would undermine the president’s Jacksonian principles, which is essentially isolationist except when honor is besmirched.  May 12th is the deadline for reaffirming the current treaty.  If the U.S. withdraws, U.S. sanctions will return.  Of course, the Europeans may decide not to follow U.S. lead, which would undermine the effectiveness of sanctions.  Iran will likely begin the process of restarting its nuclear program.  We would expect oil prices to rise, although some of the current increase is due to the market discounting the potential for an end to the agreement.

Financial markets: The dollar has been rising, while Treasury yields and equities are continuing to struggle in the face of strong earnings.  The key issue is whether or not these trends are the start of a major trend change or simply a short-term situation.  For now, we tend to think much of this is short term.  We note that liquidity levels remain elevated. 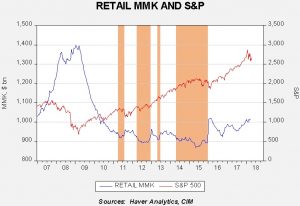 This chart shows the level of retail money market holdings along with the S&P 500.  In this bull market, the index tends to stall when money market levels fall below $920 bn.  Current money market levels are just over $1.0 trillion, meaning there is ample liquidity for investors if they choose to purchase equities.  Of course, every indicator exists in an environment of conditions and one of those conditions in this bull market has been very low interest rates.  If equities fail to rally despite ample liquidity, it could mean that rates have increased to a point where cash is seen as an alternative to fixed income or equities.  If that is the case, then this indicator may not be as bullish as it looks.  We believe it’s too early to make that case; the national rate of checking account interest is 5 bps and retail money markets are at a whopping 11 bps, so it is hard to see that as a viable alternative.

However, there is another observation that does raise our concern.  The chart below overlays the president’s approval rating with the S&P 500.  Two items are worth noting.  His approval rating steadily slumped into late December when the GOP was putting the finishing touches on the tax bill.  One would think that passing a historic tax cut would have been popular with the public, but it doesn’t appear that was the case.  Second, as the president has moved to impede trade, his approval ratings have risen sharply while the equity market has corrected.  This should signal to the president that what makes voters like him isn’t a roaring stock market but hope that workers won’t be competing with foreigners.  Protectionism is clearly not popular with equities as evidenced by the slump in the index that coincides with the move toward trade restrictions.   The lesson the president should take from this is that a weaker equity market doesn’t hurt his political stature.

The other longer term takeaway, which has been a concern of ours for a while, is that populism isn’t going to be good for financial markets.  Populism, which eventually entails de-globalization, re-regulation of the economy and higher taxes, will lead to more inflation and weaker margins over time. 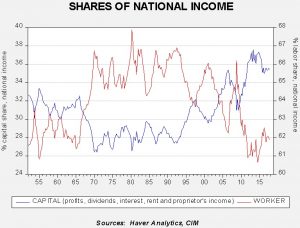 This chart shows the shares of national income that go to labor and capital.  One of our contentions is that when communism collapsed, the political class concluded it no longer had to prove that capitalism offered a better life for most people compared to communism.  The constraints on capital, in the form of regulation, were steadily lifted leading to rising capital income and falling labor income in each business cycle.  The share of national income going to capital is now at a postwar high.  The social trends we are seeing suggest this trend may be reaching its acme, meaning margins will begin falling with each business cycle going forward.  We don’t know this with certainty.  As we like to say, “they don’t call it the establishment for nothing,” but when politicians see their approval ratings rise when they push populist policies it is reasonable to expect more of such policies.  This is a long-term problem for equities; the big question we often ponder is when does the long-term become the present?  We don’t think we are there yet, but it is hard to believe we won’t be there in the next five to 10 years.

China’s #MeToo: A backlash is brewing against sexual harassment in China.  Students at some of China’s most respected universities are engaging in coordinated protests against officials who have attempted to cover up scandals on campus.  These protests bear watching because President Xi has been aggressive in quashing any organized activity that isn’t sanctioned by the CPC.  The most reasonable response for Xi will be to try to co-opt the movement, which would mean giving voice to the victims while using the party to crack down on the miscreants.  If past behavior is any guide, Xi will not tolerate an organized movement outside the party so look for a crackdown if the students insist on independence.