[Posted: 9:30 AM EDT] We are seeing some follow through from yesterday’s French election rally, although the magnitude is understandably less.  The financial markets appear comfortable that Macron will win in the runoff, and with good reason.  It would be a real shocker to see Le Pen overcome a 25-point deficit in the polls.  To give this lead some context, most reliable polls put Dewey ahead of Truman by 17 points in late September 1948.  However, this lead narrowed to a mere five points by the end of October.  Macron’s lead is clearly more than what Dewey enjoyed and the time for Le Pen to narrow the gap is shorter.

Still, if the past year has told us anything it’s that surprises are possible.  The European media is noting that Le Pen is out aggressively campaigning while Macron appears to be taking a breather.  Dewey’s campaign was also low key.  The elements of an upset are in place.  Macron is a political novice; his support is broad but not very committed and he has no real party apparatus to boost the usual politicking that goes with elections.  If the mainstream parties decide to adopt Macron as one of their own, which is what we expect, he will probably be the winner.  But, if the wide margin breeds complacency, this election may be closer than expected.  The one factor to watch, which is consistent with the Truman/Dewey contest, is a narrowing of the polls.  If an upset is to come, look for the 25-point lead to narrow significantly going into the election on May 7.

The Trump administration has indicated that it wants a major corporate tax cut, lowering the highest rate to 15%.  This is a massive cut. 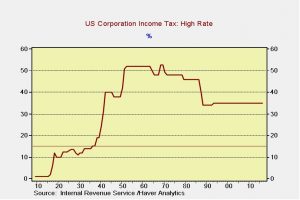 As the horizontal line shows, this would be the lowest rate since 1937.  Unlike the House plan, it doesn’t appear that Trump has offered any revenue offsets.  A simple cut is estimated to boost the deficit by $2.4 trillion[1] over the next decade.  We suspect this proposal will land with a “thud” on Capitol Hill.  Most Republicans will be quite uncomfortable with expanding the deficit, while Democrats will view the cut as a giveaway to upper income households and won’t support it. 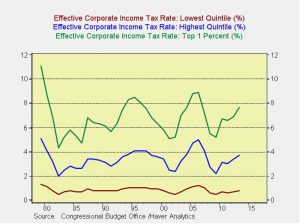 This chart shows the effective corporate tax rate by selected household income groups.  Clearly, most of the tax falls on the highest income brackets.

Meanwhile, on trade, the administration announced it is implementing new tariffs on Canadian softwood.  This issue has been a controversial one for some time.  U.S. producers complain that Canadian softwood is subsidized by provincial governments.  The tariffs will range from 3% to 24%.  This dispute follows one in which the Canadians complained that the U.S. is subsidizing milk; a product from the milk used in cheese and yogurt is being exported to Canadian processors.  Currently, Canada has decided to support its own dairy farmers to thwart U.S. dairy exports.  These disputes indicate rising trade tensions.  Reducing the trade deficit is something the president campaigned on and he appears to be taking increasingly aggressive steps in this direction.  Given that these actions don’t require Congressional approval, quick action is possible in this arena.  We will have more to say on this issue in the coming weeks.

Although a government shutdown on Saturday is possible, it does appear unlikely.  President Trump offered “flexibility” on the border wall, suggesting he will accept just about anything that promises something with regard to the proposal.  At this point, neither party appears keen on taking the potential blame for a closure.  In past shutdowns, the Freedom Caucus was more than willing to accept responsibility for this action.  Since no one wants to bear the blame, it’s unlikely that a shutdown will happen.  Instead, look for a continuing resolution to keep the government funded.