[Posted: 9:30 AM EDT] It was a remarkably quiet weekend and that pattern has continued into this morning.  Risk markets are easing this morning in what looks more like tactical profit taking.  The BOJ and Fed both meet this week, with the former finishing its meeting on Thursday and the latter on Wednesday.  Neither is expected to do very much; the BOJ is expected to keep all its measures on hold, although it may ease its bank lending facilities to copy the ECB, which allows banks to borrow from the central bank at a negative rate.  Meanwhile, we don’t expect much at all from the FOMC.  The focus will be on the June meeting, which could yield a rate hike except that the meeting will coincide with the Brexit vote which may keep the Fed on hold.

One interesting note came from a Bloomberg report that the BOJ now holds 52% of Japan’s equity ETF.  Part of the BOJ’s QE allows it to buy equities in the form of ETF.  In the short run, for investors, this direct support for equities is clearly bullish.  On the other hand, it does create two risks.  First, the central bank’s capital could be at risk if equities turn lower, and second, there is always the fear that the BOJ will, at some point, sell the ETF positions.  What makes the second point tricky is that the selling probably won’t occur for the usual reasons an investor liquidates a position, e.g., valuation, but will occur for other reasons, which could include political considerations.  In fact, once purchased, it is hard to see how the BOJ will ever be able to liquidate its equity holdings.

As we head into the FOMC meeting this week, it is worth noting that market expectations remain very low. 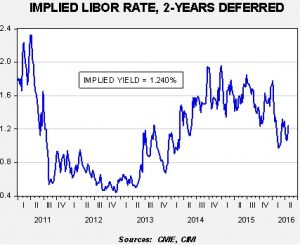 This chart shows the implied three-month LIBOR yield two years deferred.  Although the rate has lifted off its recent lows, it remains below the range set from mid-2014 into Q3 2015.  Essentially, the markets believe that the terminal rate for the policy rate will be lower than previously expected.

Finally, a few geopolitical comments are in order.  President Obama indicated that he will add 250 Special Operations troops to combat IS.  The president is in Europe, currently visiting Germany.  His tour through Britain was divisive, infuriating those who support Brexit and heartening those who want to remain in the EU.  The president also met with Chancellor Merkel; it appears those meetings were more cordial, although we do note that the president suggested the chancellor is “on the right side of history” in the immigration and refugee debate, a point that many Germans would dispute.

In Saudi Arabia, King Salman has approved the economic restructuring proposed by his son, the deputy crown prince.  The program will include the partial sale of the state oil company, Saudi Aramco, but more importantly it calls for austerity that will reduce the fiscal breakeven oil price to $66.70 from $94.80 last year (both numbers calculated by the IMF).  The fiscal austerity suggests the kingdom is digging in for oil prices to stay low for a longer period of time.  We also note that Bloomberg is reporting Saudi Aramco has increased the capacity of its Shaybah field by 0.25 mbpd to 1.0 mbpd, keeping the nation’s productive capacity at 12.0 mbpd.  There have been hints that the Saudis may lift output as U.S. production declines in a bid to capture market share.