[Posted: 9:30 AM EDT] Markets across the world are rather quiet this morning after U.S. equity indices made new closing highs yesterday.  Here is what we are watching:

China trade talks: Treasury Secretary Mnuchin and Trade Representative Lighthizer announced another round of meetings in Beijing next week.[1]  The next round will begin on April 30.  The leader of the Chinese talks, Vice Premier Liu, will come to Washington on May 8 as part of this round of discussions.  The continuation of talks is good news for financial markets; a hard break in negotiations would certainly trigger an adverse reaction.

Another try: PM May is attempting another swing at getting her plan approved.[2]  However, for this to occur, she will need significant Labour Party support, which is unlikely to develop.  Meanwhile, Scot political leader Nicola Sturgeon is laying out a “road map” for a second referendum.[3]  Although another vote is possible, establishing exactly what would be voted on is actually quite difficult.  But, if Sturgeon can find traction for a second vote, we could see one occur later this year.

Oil: The Saudis indicated today that they would not necessarily rush to increase oil production in light of the end of Iranian oil exports.[4]  That news is supportive; however, this chart suggests at least $10 of the current price reflects the level of geopolitical risk in the market. 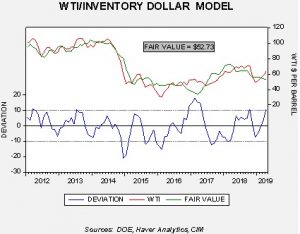 The dependent variable is the average price of WTI for the month, which is currently around $63.70.  Today, prices are running around $66.00.  We are a rather long way from fair value; in the past, when prices were this extended, we would have expected some price weakness to emerge.  However, we also note that crude oil inventories tend to decline starting in early May into mid-September, so the fair value price could improve.  Still, any reduction in tensions with Iran, Libya or Venezuela could easily lead to a $5 to $10 dollar decline in oil prices in the coming weeks.

Russian and North Korea to meet: Putin and Kim are set for meetings today in Vladivostok as the Russian leader attempts to insert Russian influence into the current nuclear negotiations.[5]  We would not expect too much to emerge from this meeting.  Kim is reportedly looking for food aid from Russia and Russia would like to see a gas pipeline to South Korea built.  Of course, the meeting will burnish the status of Russia.  On the other hand, Russia has opposed North Korea’s nuclear program as destabilizing and thus won’t likely offer significant support for that effort.[6]  On a related note, North Korea announced the demotion of Kim Yong Chol, who had been leading negotiations with the U.S.[7]  No reason was given for his demotion but we suspect the failure of the Hanoi discussions is probably the reason.

FOMO: As noted above, equity indices made new closing highs yesterday as an improving earnings outlook lifted stocks.  One of the charts we have monitored is the relationship between retail money market holdings and the S&P 500. 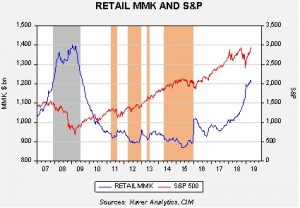 This chart shows retail money markets and the equity index.  The gray bar shows the 2007-09 recession; the orange lines are periods when money market levels fell below $920 bn.  We note that equities tended to stall when money market holdings fell below this level.  In the early part of last year, fund levels reached $1.0 trillion and, as trade tensions rose, retail investors began accumulating cash at a pace that suggested great unease; the uptrend in equities stalled.  As equity markets fell in Q4 2018, the pace of cash accumulation accelerated.  Since the recovery, retail investors continued to accumulate cash, although the pace had clearly slowed.  However, last week, we did see a $13.1 bn decline in money market funds.  This is the largest weekly decline since the week of June 10, 2009.  If withdrawals become a trend, we could see further gains in equity markets as some of this cash will likely find its way into stocks.  We will continue to monitor this particular measure of cash, but we would consider further declines to be a supportive factor for equities.

The Fed:Now that Herman Cain has bowed out, other names are starting to surface.  Judy Shelton[8] is being recommended by some.  She is popular in libertarian right-wing circles and appears to be a strong proponent of the gold standard.  What we find interesting about all the names bubbling up is that so many are gold standard supporters and such models tend to be deflationary, which is exactly the opposite of what the president wants.