Good morning, and happy Earth Day! It’s a busy Thursday, with lots of items to cover.  U.S. equity futures are steady to lower this morning.  Our coverage begins with Biden’s two-day climate summit.  The ECB holds its meeting, and we cover that too.  We update the Archegos event.  Russia and China news follow.  Our update on economics and policy is up next.  Then comes an international news roundup, some technology news, and we close with our regular pandemic update.

Climate summit:  The U.S. is holding a virtual Climate Summit today with 40 world leaders invited.  In anticipation of the meeting, the Biden administration announced it would reduce U.S. greenhouse gas emissions by 50% before 2031.[1]  Although the administration disputes the claim, it is hard to see a path to that goal without the proposed infrastructure package passing in Congress.

Overall, we view summits such as these as PR campaigns, and we suspect this one will be too.  International environmental policy suffers from two problems.  First, everyone is for the environment as long as the costs are modest, but once it starts to hurt, it gets difficult to make changes.  Second, there is a strong temptation to “free ride.”  In other words, a nation benefits from cutting emissions but does even better if other nations do so while theirs does not.  But what is important about this one is that China and Russia are participating, even with tensions high.

ECB:  Policy, as expected, was left unchanged.  In the press conference, Lagarde is clearly getting better at managing the art of central bank speak, which is to express lots of works but say little of substance.  We note her comments that the ECB doesn’t set a target for the EUR did lead the currency to rally.    The June meeting may be more problematic.  Hawks would like to start withdrawing bank purchases in the second half of the year.  We doubt this will occur due to the slow action on EU vaccinations, but this will bear watching.

Archegos:  As we note below in the China section, regulators there are dealing with a serious financial problem.  Meanwhile, the fallout from Archegos continues.  Credit Suisse (CS, USD, 10.38) appears to be bearing the brunt of the losses.  It was revealed the bank had more than $20 billion of exposure to Archegos.  It is rather stunning to have that much exposure, but apparently, the caused was improper accounting for derivative risk.    Senior executives are leaving, including the heads of the prime brokerage unit that oversaw the lending to Archegos and the risk managers.  The losses (estimated at around $4.7 billion so far) are causing the bank to raise $1.9 billion of capital.  The Swiss banks used to be the apex of high net worth banking.  However, in this incident, they were clearly outclassed by their U.S. rivals.  The bigger issue?  The earlier outperformance of Swiss banks appears, in the end, to be due to its country’s bank secrecy laws. As those have been rolled back, they have lost their edge.

The bigger concern we have with the recent financial firm crises is that if we are seeing such blowups when monetary policy is arguably the most accommodative since WWII, what happens when policy tightens?

Russia:  Putin conducted his annual press conference yesterday, and worries about the military buildup are front and center this morning.

China:  Xi argues for a new world order, and we are watching yet another financial system problem.

Economics and policy:  Taxes, inflation, and infrastructure are today’s headlines.

Searches for inflation peaked in late February, but interest remains elevated.  Reports that consumer products companies are planning on raising prices have increased concerns.  In earnings reports, companies are complaining about rising costs.  These reports are consistent with the ISM data on prices paid. 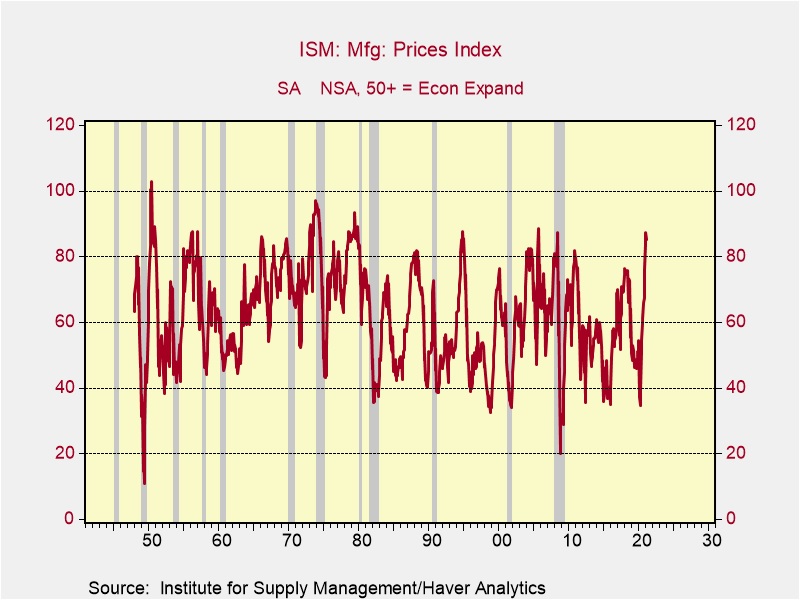 The key unknown is the degree to which firms can pass along higher costs. We fully expect some of these costs will filter through to consumer prices.  We continue to maintain that the price increases will be temporary due to the lack of inflation expectations, but we are monitoring conditions closely.  We do note that Chair Powell vows to react to a “substantial” overshoot of inflation.

Technology:  The industry continues to face the threat of regulation.

COVID-19:  The number of reported cases is 143,962,157 with 3,061,748 fatalities.  In the U.S., there are 31,862,987 confirmed cases with 569,404 deaths.  For illustration purposes, the FT has created an interactive chart that allows one to compare cases across nations using similar scaling metrics.  The FT has also issued an economic tracker that looks across countries with high-frequency data on various factors.  The CDC reports that 277,938,875 doses of the vaccine have been distributed with 215,951,909 doses injected.    The number receiving at least one dose is 134,445,595, while the number of second doses, which would grant the highest level of immunity, is 87,592,646.  The FT has a page on global vaccine distribution.  The weekly Axios map shows that infection rates have stabilized but have stopped falling.