Happy Tuesday!  Or if not “happy,” at least things are “interesting.”  U.S. oil prices yesterday not only went negative, but deeply negative.  As always, we discuss the coronavirus crisis and its latest implications below, along with reports of a new government in Israel and indications that North Korean leader Kim Jong Un may be dying. 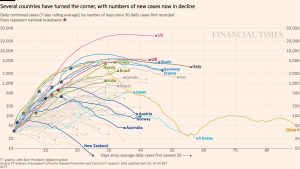 As shown, many major countries have passed the “bend in the curve” and are seeing slower case growth, but few are exhibiting sharp declines in the number of new infections.

Israel:  Prime Minister Netanyahu and his rival, Benny Gantz, have agreed to form a unity government, averting the prospect of a fourth election in the last year.