[Posted: 9:30 AM EDT] The ECB maintained its interest rates at historic lows and did not change the size of its QE program.  The Eurozone central bank left its benchmark rate at 0.00%, the deposit rate at -0.40%, the marginal lending facility at 0.25% and its QE amount at €80 bn ($90 bn) per month, all on forecast.  ECB President Mario Draghi is giving a press conference as we write and, thus far, Draghi has very much maintained the tone that the markets expected.  The central bank will keep rates at “present or lower levels for an extended time,” in addition to the bond-buying program, and rates are to remain low well past the currently announced QE timeframe.  Draghi said the ECB is waiting to see how current measures, announced last month, will affect the economy before utilizing further measures.  One of the main indicators Draghi is watching is the inflation level, which has remained below the ECB target rate of 2.0% for three years. 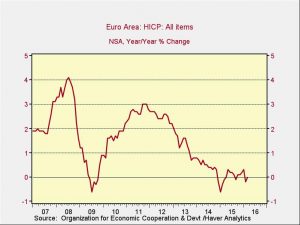 The chart above shows the annual change in the Eurozone CPI, which currently stands at 0.0%.  Draghi indicated easy policy will continue until the rate has reached the target.  The ECB says inflation rates could move back into negative territory over the coming months, before picking up again in the second half of the year.  We note that market inflation expectations are much more modest, which would keep rates lower longer and could push Draghi to introduce further unconventional stimulus, something that the central bank has expressed an openness to. 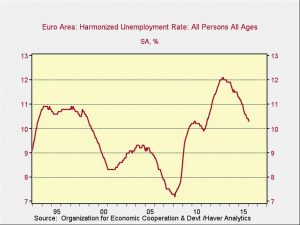 At the same time, the Eurozone unemployment rate has improved but has not reached pre-recessionary levels.  Draghi said fiscal stimulus and structural reform are needed to help the labor markets, and that the ECB will boost employment via monetary stimulus only.

The central bank’s low rates have been publicly criticized by its largest stakeholder, Germany.  Most recently, German Finance Minister Wolfgang Schaeuble stated that the general perception is that “excessive liquidity has become more a cause than a solution.”  In addition, critics of the low rates voice concerns that the central bank has reached its limit of monetary policy and that low rates are adding to political uncertainty, including the rise of populism.  Draghi’s response to the criticism was that the central bank’s board is in unanimous agreement that the ECB needs to maintain its independence from political goals.  This unanimous agreement includes the president of the German Bunderbank, Jens Weidman.  The ECB is also being criticized by other Eurozone countries for failing to do enough to lift economic growth.  Thus, Draghi is in the difficult position of trying to placate both sides, and his lean toward data-dependent policy could take some pressure off the central bank.

The possibility of “helicopter money,” a program under which money is injected directly into the economy by transferring funds to consumers, has sparked public debate recently.  However, Draghi emphasized the ECB has “never discussed” the possibility and is actually surprised that the market has been so interested in the program.

U.S. equities have moved sideways on the news, while European risk markets have moved modestly lower. The euro stayed higher leading into the press conference, but has now given back its gains during the Draghi press conference.  The chart below shows the euro’s move this morning. 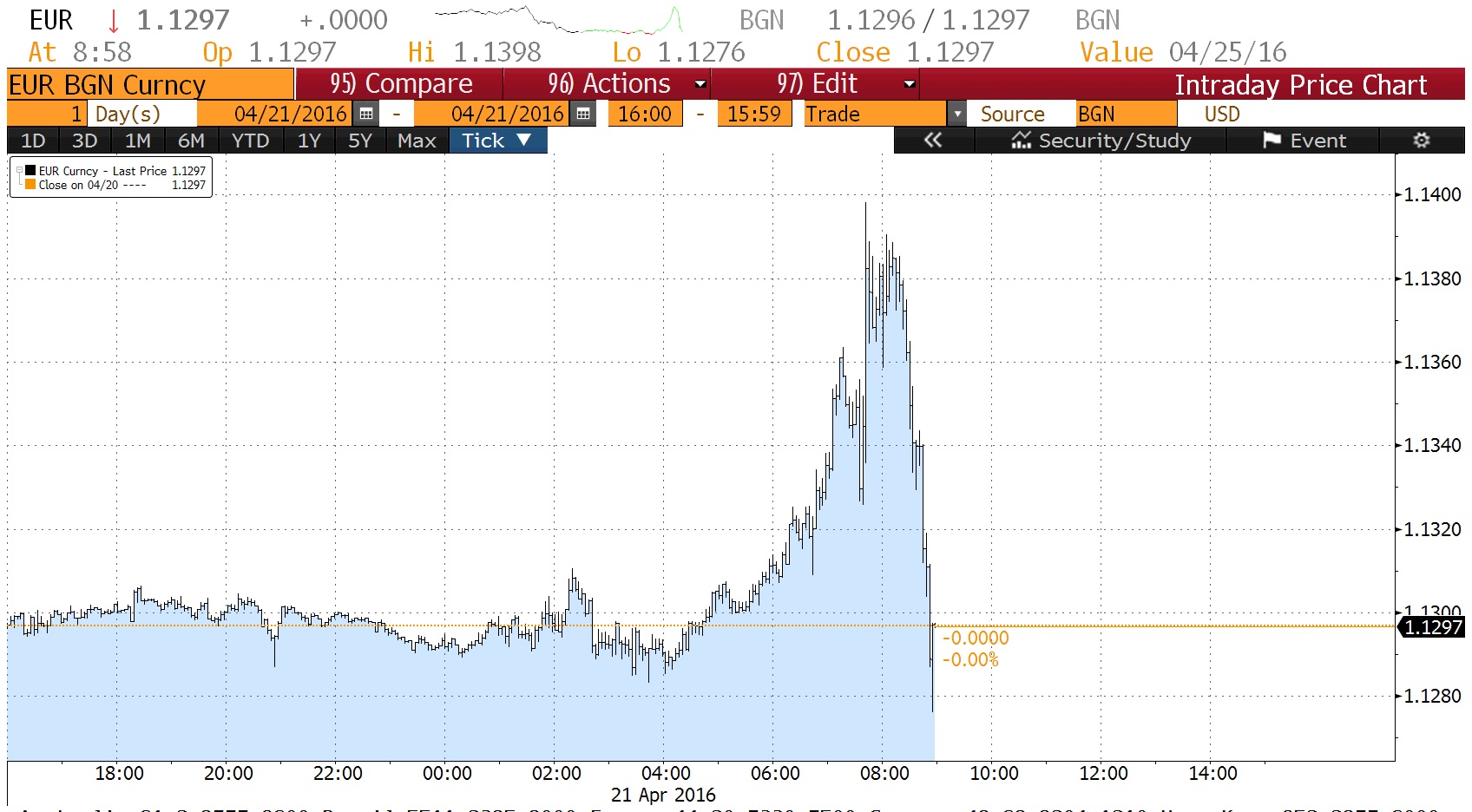