[Posted: 9:30 AM EDT] U.S. equities are mostly flat, while we are seeing weakness abroad.  The Mueller report[1] gets released this morning, so the media will be focusing on that all day.  European PMI data was lackluster.[2]  In a fascinating development, a Democratic Party stalwart announced he isn’t running for president.[3]  Note that with the markets closed for Good Friday, we will not be publishing a Daily Comment tomorrow but will resume on Monday.  Here is what we are watching:

Turkey: A couple items of note.  It appears the opposition has taken control of the city of Istanbul[4] even though President Erdogan continues to contest the vote.[5]  There are reports that the Turkish central bank has been tapping swap lines to give the impression it has ample reserves.[6]  Although the borrowing is a concern, we would note that the TRY has already depreciated substantially[7] and the current account has shown marked improvement. 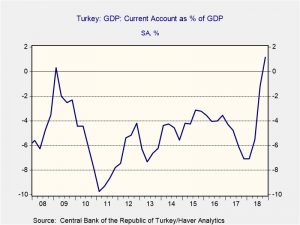 We also note that Turkish officials made an unexpected visit to Washington,[8] apparently trying to avoid sanctions tied to its decision to buy Russia’s S-400 missile system.  The U.S. had approved the sale of F-35 warplanes to Turkey but is suspicious of selling them to Ankara if it also has Russians in the country “helping” deploy the missile system.  Such an arrangement would give the Russians the ability to probe for weakness in the F-35’s defenses and make the stealth plane vulnerable to the S-400 anti-aircraft missiles.[9]  Finally, Turkey is working on new trade procedures to continue commerce with Iran but avoid U.S. sanctions.[10]

China trade talk: Although not confirmed, there are reports that the U.S. and China are planning for an early May trade deal announcement.[11]  To some extent, financial markets have already discounted a modest agreement, but a deal that would lift tariffs immediately would likely give stocks a boost.

North Korea: North Korea announced it tested a tactical system.[12]  It isn’t clear whether the test was artillery or a short-range missile, but it was clearly not a ballistic missile, which would have triggered a strong reaction from Washington.  It appears Pyongyang is attempting to get the attention of the U.S. without crossing lines that would escalate tensions.  This is not unusual behavior for North Korea; it does not want to be ignored.[13]  At the same time, this test is likely nothing more than an attempt to gain attention.  Meanwhile, North Korea has indicated it would prefer not to have SoS Pompeo involved in future discussions on its nuclear program.[14]  This request is an obvious attempt to split the U.S. foreign policy establishment; we doubt President Trump will grant that request but, if he does, a deal favorable to Pyongyang is more likely.

Conservatives rise in Canada: Albertans voted in a landslide to bring back a conservative provincial government.[15]  Center-right parties now control five of the 10 provinces and increase the chances that PM Trudeau may be in trouble in October’s national elections.[16]  Trudeau has been pushing for carbon taxes to combat climate change; Alberta is the home of Canadian tar sands and is thus vulnerable to such measures.  In addition, Alberta’s energy sector has been under pressure mostly due to the lack of pipeline capacity from the province.  Some pipeline projects have been blocked by liberal-leaning provinces.  Thus, the conservatives in Alberta were able to blame Trudeau for the economic travails and the tactic was apparently successful.  Although Trudeau was never going to poll well in Alberta anyway, the economic message could resonate outside of Alberta and hurt his chances in October.

Indonesia election: Incumbent President Joko Widodo (Jokowi) is the apparent winner in this week’s elections in Indonesia.[17]  Financial markets have reacted positively to the news.

Inflation talk: This week’s Asset Allocation Weekly looks at the inflation conundrum—why is inflation staying low despite tight labor markets?  The Dallas FRB weighed in on this issue, suggesting the growth of “gig” workers, who work on demand and don’t require a commitment from employers, is reducing wage costs, allowing firms to maintain margins and are thus less compelled to push price increases onto consumers.  In addition, the expansion of online retailing means that consumers now have a national market to tap, which helps avoid local bottlenecks and monopolies and thus keeps prices low.  Although not mentioned in the article, it also reduces price discovery costs.[20]  All these are valid points.  Another interesting item—after last year’s tax cuts, we noticed a flurry of bonuses offered to workers to “share” the benefits of the corporate tax rate reduction.  However, it appears this generosity was “one-off”; bonuses in 2018 have fallen relative to the prior year.[21]

This is the seasonal pattern chart for commercial crude oil inventories.  We are nearing the end of the spring inventory build season and will probably not achieve average, although the gap has narrowed significantly in recent weeks. 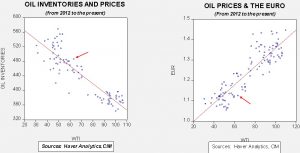 Based on oil inventories alone, fair value for crude oil is $55.77.  Based on the EUR, fair value is $52.40.  Using both independent variables, a more complete way of looking at the data, fair value is $52.71.  Current prices are running well above fair value.  Geopolitical risks are bolstering prices.  The unrest in Libya could end up reducing output to zero if the fighting continues.[22]  In Venezuela, the Spanish oil firm Repsol (MCE, EUR, 15.07) has suspended oil swaps with Caracas due to pressure from Washington.  Repsol was swapping refined product for crude oil, avoiding dollar payments that would have run afoul of U.S. sanctions.  By suspending the arrangement, Venezuela now only has similar deals with Russia and India.  The former probably won’t be lost but the latter is vulnerable.  More product losses will likely lead to further reductions in Venezuelan oil output.  Thus, the geopolitical risk is real but the wide spread to fair value does suggest that a good bit of the risk has been discounted.