[Posted: 9:30 AM EDT] Equities are trending higher in a quiet trade.  China’s economic data was solid.  Here is what we are watching:

Chinese data: GDP came in a bit better than expected, at 6.4%, but since GDP is mostly a manufactured number we expect it to always be around forecast.  Industrial production made a strong recovery; on a yearly basis, it was up 8.4%. 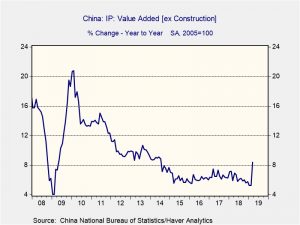 In fact, the “hockey stick” recovery raises questions as to the veracity of the report.  We will be watching future data for a cooling.  Fixed investment rose 6.3% in Q1, with infrastructure spending leading the growth.

Overall, the data suggest that stimulus is working to lift the economy which is good news.  There are always worries about sustainability given China’s debt levels but, for now, China’s bounce should support global growth.

Fed talk: Larry Kudlow admitted that the White House is looking at other candidates for Fed governor, acknowledging that Senate opposition may be too high to secure the nomination of either Stephen Moore or Herman Cain.[1]  We are a bit surprised the White House isn’t pressing harder for its two potential nominees.  At the same time, there are lots of doves out there that would be less controversial and almost anyone now would look less so compared to Cain and Moore.  An interesting thought comes from Steve Englander of Standard Charter:

“A conservative version of Modern Monetary Theory (MMT) could arguably work just as well as the standard progressive version and would probably support asset prices initially. This conservative version sounds like the Fed-accommodated tax cut regime that the Trump administration seems to be supporting.”

Although MMT is usually considered a tool of the left, in reality, the importance of MMT[2] is that it will give permission to policymakers to ignore the deficit.  And, as Englander postulates, it could be a tool of the right which could expand the deficit through tax cuts and defense spending and “encourage” the Fed to accommodate the spending by keeping interest rates low.  The U.S. managed WWII spending in this fashion and it was generally successful in funding the war effort.  The risk is inflation. 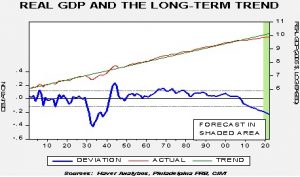 The key is whether the stimulus increased aggregate demand beyond the capacity of aggregate supply; when this occurs, inflation is the result.  And so, the issue is capacity.  This chart shows real GDP from 1901 on an annual basis.  We have log-transformed the data and regressed a time trend through the data.  The lower line is an approximation of how far GDP is below trend.  We have seen two periods in the last 118 years when GDP was well below trend—the Great Depression and now.  Although the trend line may not represent capacity, it is likely a reasonable guess.  If so, there is currently ample available capacity for stimulus.  And, at some point, we expect one of the political parties to accept MMT for its political goals and one shouldn’t necessarily assume it will be the Democrats that adopt it first.  In any case, the adoption of MMT will, eventually, be inflationary.  But, that “eventually” may be a lot longer than expected.

Autocrat news: In Egypt, President Abdel Fattah al-Sisi has solidified power by extending his term of office into 2030 and increasing the power of the military.[3]  In Brazil, it appears President Bolsonaro may have intervened to prevent Petrobras (PBR, 15.37) from raising prices on diesel fuel.  The company has denied the rumors, but such behavior is consistent with “strongmen.”[4]