[Posted: 9:30 AM EDT] Erdogan narrowly wins: In Turkey, it appears that voters have approved major changes to the political system by a 51% to 49% margin.  There were reports of widespread voter irregularity and the opposition has announced it will formally protest the vote.  The new laws will dramatically boost the power of the presidency, changing it from a mostly ceremonial, non-partisan post to an executive presidency with wide powers.  The parliament will see its powers reduced, requiring supermajorities to open investigations on any of the president’s deputies or ministers.  The president will effectively be able to govern by decree and can dissolve the parliament at will.  He will also be able to appoint deputies, ministers and some judges without legislative oversight.

The new powers won’t go into effect until the next president is elected; elections are not scheduled until November 2019.  Although a spokesman for Erdogan said that he isn’t planning snap elections to take advantage of these new powers, it seems unlikely that he will wait that long.  The president can serve two consecutive five-year terms but can sit for a third if elections are called before the second term ends.

We will be watching for two signals.  First, will the opposition’s voter fraud charges have any impact, and second, assuming the first matter fails, will the opposition accept the results without political and social unrest?  On the first point, we doubt the charges will stick.  There were numerous media reports suggesting uncertified ballots were counted.  This could be a form of ballot box stuffing, but we doubt Erdogan will take these charges seriously.  On the second point, given how close the vote was, we would expect some degree of tensions.  We doubt these issues will have too much effect on financial markets.  European powers have indicated some unease over the results, but the threat of a refugee flood will likely quell these concerns.

North Korea: It was the 105th birthday of the founder of the DPRK, Kim Il-sung.  Such occasions usually bring some sort of tests to show North Korea’s prowess.  Although it does appear the country is preparing a nuclear test, it opted for a missile launch which apparently exploded on takeoff.  While incompetence should never be discounted, there was some speculation in the analyst community that U.S. cyber efforts may have played a role.  VP Pence is in South Korea and reiterated the line about the “end of strategic patience.”  We also note Bloomberg[1] is reporting that President Trump is considering a “sudden strike” on North Korea, although the preferred policy is for China to undermine the Kim Jong-un regime.  With steady escalation, Robert Litwak of the Woodrow Wilson International Center for Scholars describes the situation as “the Cuban missile crisis in slow motion.”[2]  Although the financial markets have not done much with the North Korean situation (the JPY would likely be weaker if a war was imminent because Japan would almost certainly be a target), the odds of escalation are probably higher than before.  North Korea is getting closer to a deliverable nuclear weapon and no amount of sanctions appear able to deter that steady progress.  At some point, the U.S. will either need to attack North Korea to slow or stop its progress, negotiate a slowdown or live with a nuclear Kim regime.  The second option is preferred but also the least likely.

We have recently noted the growing political polarization of the country.  This chart shows that it even affects views on the economy.

This chart measures perceptions of the economy by voters in Wisconsin based on political party.  Note that during the 2012 elections, Republicans were far more despondent about the economy than Democrats.  The recent flip is notable and has probably affected some of the well documented improvement in the survey data.  What is also interesting about the data is that Democrats seldom become overly bearish on the economy, whereas GOP voters seem to have rather violent mood shifts in their outlook.  We do want to note that this is only one state but it does reflect national data, although the shifts are less pronounced.  If GOP voter hopes become dashed due to the lack of progress on taxes and other fiscal measures, we could see a reversal in the survey data.

President Trump has indicated that he is likely to select Randy Quarles to the FOMC for the top regulator post.  The Dodd-Frank bill created a role on the FOMC for a governor dedicated to regulation.  This post was never officially filled, but the recently retired David Tarullo had informally filled the position.  Quarles is considered a moderate and was a Treasury undersecretary in the Bush administration.

On Good Friday, the BLS released the consumer price index for March.  The data came in surprisingly soft.  On a yearly basis, the core rate fell 20 bps to 2.0% while the overall rate dipped 30 bps to 2.4%. 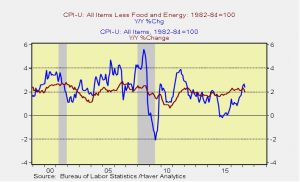 Lower inflation did affect the Mankiw Rule model results.  The Mankiw Rule models attempt to determine the neutral rate for fed funds, which is a rate that is neither accommodative nor stimulative.  Mankiw’s model is a variation of the Taylor Rule.  The latter measures the neutral rate by core CPI and the difference between GDP and potential GDP, which is an estimate of slack in the economy.  Potential GDP cannot be directly observed, only estimated.  To overcome this problem with potential GDP, Mankiw used the unemployment rate as a proxy for economic slack.  We have created four versions of the rule, one that follows the original construction by using the unemployment rate as a measure of slack, a second that uses the employment/population ratio, a third using involuntary part-time workers as a percentage of the total labor force and a fourth using yearly wage growth for non-supervisory workers. 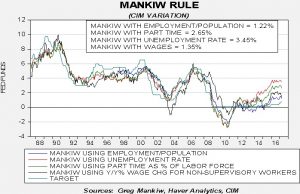