[Posted: 9:30 AM EDT] Equities are trending higher in a quiet trade.  Media is focused on the tragic Notre Dame fire.  Here is what we are watching:

Fed talk: Chicago FRB President Evans and Boston FRB President Rosengren (both voters this year) made essentially dovish statements on monetary policy.  Both suggested that inflation should be allowed to move above the 2% target since it has been below target for an extended period.[1]  For most of their tenures, both were considered to lean dovish on policy.  However, in recent years, both had become more hawkish, citing worries about easy policy causing distortions in the financial markets.  Governor Brainard has made similar indications.  Although there is theoretical support for such a policy stance (Hyman Minsky would be supportive), in practice, it’s pretty difficult to pull off.  Imagine a Fed chair going to Congress and admitting the Fed raised rates to trigger a correction in stocks because the central bank ascertained that the P/E was too high.  At the same time, we have showed that the Fed might consider equity volatility in setting policy.[2] 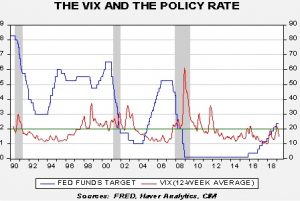 Since the early 1990s the Fed has tended to tighten when the Vix is below 20 (on a 12-week moving average basis).  The only time the Fed raised rates with an elevated Vix was in the late 1990s.  We note that Greenspan waited for the Vix to fall below 20 before raising rates and Yellen started raising rates after the Vix had been below 20 for a long period of time, only to stop when the Vix spiked.  The recent pause is consistent with the rising Vix, although we would note that the Vix has been declining and if it continues we would expect pressure from Rosengren, Evans and Brainard for a rate hike.  That’s why dovish comments from the Boston and Chicago FRB leaders are important and likely lifting the market today.

Trade talk: The EU and Japan are engaging in trade talks with the U.S.  The EU’s discussions look like a stall tactic; the Europeans want to conclude talks by year’s end.  By then, the U.S. presidential election process will be in full swing and EU officials know the White House will want to have talks wrapped up so the president can concentrate on reelection.  We also note that the EU refuses to open up negotiations on agriculture and wants to avoid specific measures on autos.  We doubt that U.S. negotiators will tolerate these limits.[3]  We also note that the EU is considering separate tariffs on U.S. exports, up to €20 bn, if the U.S. penalizes the EU over aircraft subsidies.[4]  Two takeaways—first, the EU plans to “slow walk” broader negotiations with hopes that either elections or a new government will relieve trade pressure, and second, the potential for a trade conflict may be falling with China but it may be rising with the EU.  The market impact would be the same—bad for risk assets.  Meanwhile, trade negotiations with Japan began yesterday.[5]  Japan wants to separate talks on goods and services from forex; we suspect Japan is quite pleased with the current level of the JPY and does not want it to strengthen toward parity, which is estimated to be around ¥60.

Shadow lending tightening: In the financial system, there are traditional banks and “shadow” banks.  Both do lending but the latter do not take in deposits.[6]  Essentially, lenders make money on the spread; either on a time spread, by borrowing short and lending long, or on credit, by borrowing low-risk liabilities and lending to riskier assets.  Traditional banks are regulated, whereas shadow banks are generally not.  At the same time, shadow banks don’t have access to the Fed’s discount window, where banks can tap funds in times of stress.  Thus, shadow lenders have two significant risks.  The first is that the flow of funding, essentially the short-term money markets (repo, for example), freezes up; this risk is heightened due to the lack of access to the Fed window.  The second is that loans stop performing.  With regard to the latter, some notable shadow lenders announced they are taking steps to reduce loan exposure on fears of economic weakness.[7]  Paradoxically, these actions can accelerate the trend toward a downturn because even if borrowing costs fall to the shadow banks reluctance to lend can end up weakening economic growth.

A political microcosm: One of the reasons we track U.K. politics is because it often offers insight into American politics.  The commonality of language and support for free markets (both nations are considered “Anglo-Saxon” by continental Europe) are likely the reasons for the similarities.  Brexit has been interesting to watch because it isn’t directly represented by a person.  Instead, it is an idea.  When a person represents an idea, the concept itself can get muddled; a voter may oppose the policy of a political figure but like his image and thus continue to support him (it can work the other way, too).  This notion relates to what American pundits refer to as the “beer test”—would a voter like to have a beer with this person.

Brexit relieves us of the personality factor.  Large political parties strive to be a “big tent”; they want to avoid clear ideological boundaries and instead project rather amorphous values.  Within political parties, there are ideologs that try to force the parties to pure positions.  The leadership of large parties try to avoid this development and keep the focus on personalities because they see that as the best way to gather a larger swath of votes.

With Brexit, the personality factor is reduced and in its place are two difference visions of state and the future.  Leavers want a singular U.K. that is provincial and nationalist; Remainers have a more cosmopolitan view of the world, one that has close ties to the EU.  Recent polling shows that the electorate is breaking down, about evenly, between leave and remain.  Regardless of who wins, the loser will be a significant minority, one that feels its vision for the country has been lost.  For example, among Labour supporters in the poorer parts of Britain, there has been a shift to the Conservatives, who are seen as leavers.  Meanwhile, Tories in London who support remaining are shifting allegiance to Labour.[8]

For this reason, we continue to monitor the path of Brexit not so much because of what the British exit or non-exit means but for the potential harbinger of political changes in the U.S.  We do expect that if the U.K. leaves, the short-run impact will be difficult, but in the long run it probably makes sense to go because we doubt the EU will last for another decade.  Thus, leaving early will probably be a benefit.  But, as noted, Brexit reflects political division that are becoming clearer in the U.S.   What is uncertain is how the political landscape will look in the future as these divisions are resolved.

[6] Most believe that traditional banks lend out deposits but, in reality, they are not much different than shadow banks in that they don’t really need deposits to make loans.  https://www.zerohedge.com/contributed/2014-03-20/bank-england-admits-loans-come-first-%E2%80%A6-and-deposits-follow