[Posted: 9:30 AM EDT] Oil prices are modestly higher after a small decline yesterday due to a higher than forecast weekly oil inventory report, which we cover below.  Prices were down until IEA headlines emerged indicating that the OECD’s oil monitoring body is expecting the oil market to balance later this year.  We would tend to agree with this position, although balancing the market doesn’t address the massive inventory overhang that will need to be worked off.  Still, balance means that the cyclical low in oil prices is probably in place.

Yesterday’s oil inventory data was a bit bearish, although it was somewhat offset by falling gasoline stockpiles. 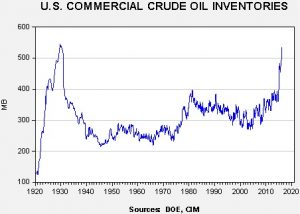 Inventories have started to lag the usual seasonal pattern.  This is supportive for oil prices. 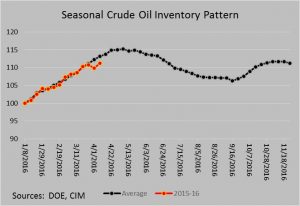 We would expect inventories to peak at 547.8 mb over the next three weeks from 536.5.  Assuming a stable EUR of around 1.1375, fair value for oil is just under $38 per barrel.  Thus, prices are a bit overvalued, mostly due to expectations of positive OPEC news on Sunday.  We wouldn’t be surprised to see choppy markets over the next week or so as the OPEC news is likely discounted.  However, as noted above, the lows are likely in place and we should see better oil prices as we move into summer.

Another somewhat overlooked factor for oil that we are starting to take note of is that the regulatory burden on energy production is starting to increase.  The Obama administration released its offshore drilling regulations and the response from industry is that the new rules will kill numerous projects.  Exxon-Mobil (XOM, 84.83) told Bloomberg that the rule will cost $25 bn over 10 years, which is 25x the government’s estimate.  We also note that there are increasing regulations on onshore drilling as well.  One of the fears in the marketplace is that if oil prices recover, oil companies in the U.S. can quickly bring new production to market and kill off any rallies.  That scenario becomes less likely if the regulatory environment increases the costs of new projects.  In other words, regulation affects breakeven costs and projects will face higher hurdles and supply will contract as regulations rise.

With today’s inflation data, we can update our versions of the Mankiw rule model.  This model attempts to determine the neutral rate for fed funds, which is a rate that is neither accommodative nor stimulative.  Mankiw’s model is a variation of the Taylor Rule.  The latter measures the neutral rate by core CPI and the difference between GDP and potential GDP, which is an estimate of slack in the economy.  Potential GDP cannot be directly observed, only estimated.  To overcome this problem with potential GDP, Mankiw used the unemployment rate as a proxy for economic slack.  We have created three versions of the rule, one that follows the original construction by using the unemployment rate as a measure of slack, a second that uses the employment/population ratio and a third using involuntary part-time workers as a percentage of the total labor force. 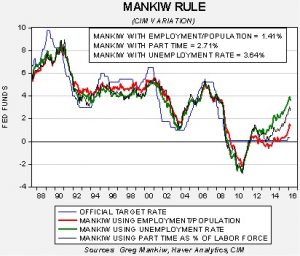 Using the unemployment rate, the neutral rate is now up to 3.64%, suggesting the FOMC is well behind the curve.  Using the employment/population ratio, the neutral rate is 1.41%, indicating that, even using the most dovish variation, the FOMC needs a rate hike of at least 100 bps to achieve neutral policy.  Finally, using involuntary part-time employment, the neutral rate is 2.71%.  Although these neutral rate estimates are well above the current target, it is important to note they have all declined by 20 to 30 bps over recent estimates.  First, core CPI declined to 2.19% from 2.30% and improving labor markets are boosting the labor force, leading to a higher unemployment rate and fewer involuntary part-time workers.  The drop in the estimate using the employment/population ratio is fully due to the drop in inflation as the ratio is showing strong improvement.  However, we can safely argue that if the FOMC believes in the Phillips Curve then, according to any measure, it should be lifting rates.  We suspect that the dollar may have, at least for now, become a better indicator of monetary policy.  With the dollar still relatively strong, we expect Fed policy to remain stable.