President Rousseff of Brazil came another step closer to impeachment yesterday as a congressional impeachment committee voted to recommend a Senate trial.  The next step is a vote by the full Chamber of Deputies on Sunday.  If two-thirds of the Deputies vote to impeach (342/513), the case will go to the Senate for trial.  During the trial, which must be completed in 180 days, Vice President Michel Temer will be in power.  According to Brazilian media reports, Temer was caught practicing his speech for when he is in control.

Brazilian equities have been rising in anticipation of impeachment.

The Brazilian real has been appreciating as well.

Two notes of caution.  First, it isn’t clear whether the Brazilian legislature will take steps to remove Rousseff.  Although it appears that Rousseff and her predecessor, Lula, took enormous amounts of money from the oil boom, the level of corruption in Brazil is rather high, in general.  Transparency International, the corruption monitoring NGO, gives Brazil a ranking of 38/100, with 100 indicating almost no corruption.  Globally, Brazil ranks 76th out of 167 countries, putting it in line with Bosnia, India, Thailand, Tunisia and Zambia.  The OECD has designated Brazil’s corruption enforcement level as “little” (the second lowest level possible).  This may be a situation similar to the Biblical narrative of Jesus and the woman taken in adultery.[1] There is no guarantee that Rousseff will be removed from office even if impeachment proceedings begin.  Second, removing Rousseff doesn’t necessarily fix the problems facing Brazil; its economy remains heavily dependent on global commodity demand and the political upheaval that impeachment will likely bring could undermine risk assets.  Thus, the financial markets may have gotten a bit ahead of themselves if the Rousseff impeachment is driving equities higher and leading to BRL appreciation.

Bloomberg is reporting that the Bank of Japan (BOJ) is easing the level of deposits affected by NIRP.  This news lifted Japanese bank shares, although we wonder if this action really says that NIRP is a mistake.  After all, reducing the level of deposits affected will also tend to reduce the incentive to lend these deposits into the economy.  On the topic of banks, we note that Italy appears to be making progress on creating a “bad bank” for non-performing loans (NPLs) in a bid to recapitalize the banking system.  After this new bank buys NPLs from an Italian bank, the latter should be able to issue new equity to recapitalize itself…if investors are willing to buy the new equity.  The bad bank will be capitalized from the banks itself, although we would expect government support. 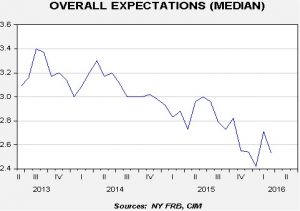 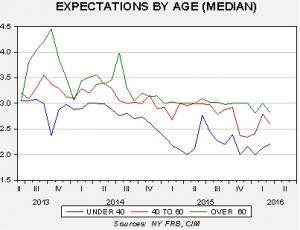 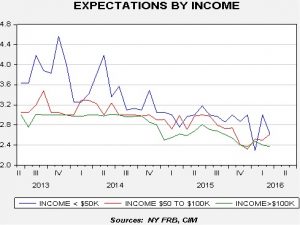 Note that higher income households tend to have persistently lower inflation expectations.  This is probably because they spend less of their income proportionally on necessities and thus rising oil or food prices affect their inflation perceptions less.  Expectations for the lowest bracket are falling coincident with the decline in oil prices.

Overall, these data do suggest that inflation expectations remain low, which gives the FOMC room to wait if it so desires.