[Posted: 9:30 AM EDT] It’s risk-off today; risk markets are lower on a swirl of issues that are weighing on sentiment.  Here is what we are watching:

Action on Syria: The president tweeted this morning, warning Syria and Russia that the U.S. is preparing an attack on Syria for its recent use of chemical weapons.  There are several known/unknowns with this action.  First, what will be the scope of the attack?  We see four potential outcomes.  It could be a mere symbolic attack like the one seen last year, where a salvo of cruise missiles hit various targets.  That event didn’t deter the Assad regime then and it won’t do so now.  The attack could also be broadened to strike chemical weapons dumps.  Such attacks do increase the risk of collateral damage, including triggering weapon spillage and inadvertent casualties of Iranian or Russian soldiers.  Third, the attacks could be broadened even further to include not just existing weapons but also production facilities.  This type of strike would increase the chances of collateral damage.  Lastly, the U.S. and its allies could directly attack Syrian military assets, including bases, aircraft, artillery, etc.  Collateral risks escalate with this option, but it would clearly get Assad’s attention.

The second “known/unknown” is the potential counter-response.  What will Russia or Iran do in response to a U.S. and allied attack?  Would Iran attack the Gulf States if they participate in airstrikes?  Would Iran target oil facilities?  Would we see a cyberattack in response?  Essentially, there are growing risks here, especially with a White House that contains more belligerent advisors than when a similar attack occurred last year.

We are looking for a broader attack and it may take a week to 10 days before the full event unfolds.  There are no aircraft carriers in theater at present.  Although there are significant U.S. military assets already in the region, if it is going to be an expanded attack we would expect at least one carrier group to be moved into position.  The CVN Theodore Roosevelt is in Singapore and could be in range within a week or so.  We also expect some participation from France, although it appears the U.K. has decided not to engage.  This event will offer insight into John Bolton’s influence; although regarded as an unabashed hawk, the role of the National Security Advisor is to offer the president options and advice.  The potential for escalation is elevated and may take some time to resolve.  Oil and gold are the greatest beneficiaries of this news.

Threats against Mueller: The media is rampant with reports that the White House is considering firing Special Counsel Mueller and it believes it has the legal authority to do so.  The consensus of legal opinion is that he doesn’t; only the Attorney General can do that and the current holder of that office has recused himself from the Russia investigation so the deputy has that role.  If the president doesn’t have the authority, we could see the spectacle of the “Saturday night massacre,” when Nixon ordered his AG Elliot Richardson to fire Archibald Cox.  Richardson refused so Nixon fired him.  Nixon then ordered Deputy AG Ruckelshaus to fire Cox; the deputy refused and was fired as well.  Nixon next ordered Solicitor General Bork to execute the firing, and a reluctant Bork did fire Cox (which probably prevented Bork from sitting on the Supreme Court).  Firing Mueller would get messy because it veers into the somewhat vague boundaries of constitutional power.  Usually, Congress sees such actions as interfering with its oversight of the executive branch and reacts.  As long as Congress is in the hands of the GOP, Trump might get away with removing Mueller.  However, Trump runs two risks.  First, Congress has historically reacted against the usurpation of its executive branch oversight and may turn on the president.  It’s important to note that most of the GOP leadership is establishment, not populist, and would not be overly opposed to quashing populism.  The establishment has gotten its tax cuts and may view the president’s actions as taking the party into areas where the elite would prefer to avoid.  Second, nothing would fire up the opposition more than removing Mueller.  The odds of the House flipping to the Democrats would be elevated (we note reports that Speaker Ryan is not seeking re-election), and removing Mueller would even put the Senate into play.  For markets, such turmoil would undermine sentiment; it would be negative for equities and probably bearish for the dollar as well.

Russian sanctions: Expanded sanctions on Russian figures close to President Putin have boosted aluminum prices as the Russian firm Rusal (486:HKG, HKD, 2.06) has been hit by sanctions.  U.S. regulators are warning British banks that their relations with Russian oligarchs could put them at risk.  The ruble is weakening and the small, but not zero, potential that Russian oil firms could come under scrutiny is probably helping oil prices this morning.

Facebook (FB, 165.04): CEO Zuckerberg generally held his own yesterday mostly because most of the questioners were completely ignorant of how not only social media works, but the internet in general.[1]  Only Ron Johnson (R-WI) nailed it when he asked Zuckerberg if his company should pay users for their data.  This is really the crux of the matter.  If social media is merely a constant focus group for advertisers, they should pay us for our time.  We don’t expect this train of thought to go anywhere.

Something of note: For the first time since the end of WWII, the Japanese Defense Force has created a contingent of marines.  The Japanese military has avoided such forces because they were seen as offensive units and its pacifist constitution outlawed such actions, therefore marines were seen as unnecessary.  Apparently, due to China’s growing threat and fears of likely U.S. disengagement, Japan has concluded it needs an amphibious force to protect its various island chains from encroachment.

Fed policy:  With the release of the CPI data we can update the Mankiw models.  The Mankiw rule models attempt to determine the neutral rate for fed funds, which is a rate that is neither accommodative nor stimulative.  Mankiw’s model is a variation of the Taylor Rule.  The latter measures the neutral rate using core CPI and the difference between GDP and potential GDP, which is an estimate of slack in the economy.  Potential GDP cannot be directly observed, only estimated.  To overcome this problem with potential GDP, Mankiw used the unemployment rate as a proxy for economic slack.  We have created four versions of the rule, one that follows the original construction by using the unemployment rate as a measure of slack, a second that uses the employment/population ratio, a third using involuntary part-time workers as a percentage of the total labor force and a fourth using yearly wage growth for non-supervisory workers. 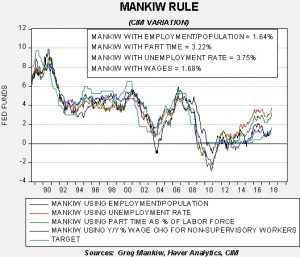