[Posted: 9:30 AM EDT] German 10-year sovereign yields are down to 11 bps this morning.  Falling German yields are translating into low U.S. Treasury yields.

Since mid-2013, when Chairman Bernanke unveiled tapering, the two yields have been closely linked.  Interestingly enough, the spread between these rates has been rather closely linked to the EUR/USD exchange rate. 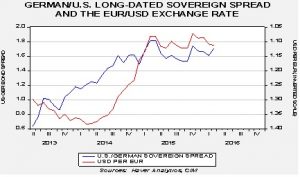 Based on the long-duration sovereign spread, the EUR/USD exchange rate is about in line with fundamentals.  For a weaker EUR, assuming all else remains constant, the long-duration spread would need to widen.  It is hard to see how much further German yields could fall as they are close to negative levels.  That isn’t to say German yields could not fall below zero, but falling much below zero probably isn’t likely.  Thus, a stronger EUR/USD will likely come with rising long-dated Treasury rates.  As long as inflation expectations remain anchored and the Fed policy rate moves slowly, a major rise in Treasury yields is unlikely.  Overall, we would expect a mostly steady EUR/USD into Q2.

An interesting NYT article caught our attention over the weekend reporting that there has been an upswing in intergenerational housing.[1] 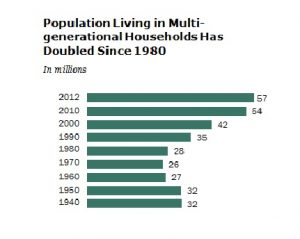 One of the effects of Social Security was to allow the elderly to stay in their own homes until they either required nursing care or passed away.  This was a major change from housing habits prior to the Great Depression.  However, we have seen a steady rise in the number of Americans living in multigenerational housing, particularly since 1990.  We suspect the insecurity of incomes for younger Americans and the need to attach to older Americans’ steadier income (due to regular Social Security) has led to this development.  In other words, economic factors are leading American families into arrangements where incomes are being pooled, a response to low income growth.  The NYT article noted that home builders have taken notice of this trend and are building new homes with accommodations for multiple generations.  This social development, coupled with older Americans remaining attached to the labor force, is part of the adaptations being made due to slower family income growth.