We have published our latest Weekly Geopolitical Report, which constitutes Part III of our series on the Geopolitics of Central Bank Digital Currencies (CBDC).  We also have several other recent multimedia offerings.  There is a new chart book recapping the recent changes we made to our Asset Allocation portfolios.  Here is our latest Confluence of Ideas podcast.  Our most recent Asset Allocation Weekly, chart book, and podcast are also available.  Note: Due to the upcoming Good Friday and Easter holidays, we will not publish an AAW this week; it will resume on April 9.  Being Thursday, there is a new Weekly Energy Update.  You can find all this research and more on our website.  As a reminder, due to the Good Friday market closures, there will be no Daily Comment tomorrow; we will be back on Monday and recap the employment report on that day.

Good morning.  It’s Opening Day!  Major League Baseball kicks off its season to mostly restricted crowds.  On the first day of Q2, U.S. equity futures are ticking higher.  Our coverage begins with economics and policy the day after the infrastructure package was revealed.  An update on the Archegos event comes next.  China and international news follow.  Technology is next, and we close with a pandemic update.

Economics and policy:  The infrastructure package dominates this sector’s news. 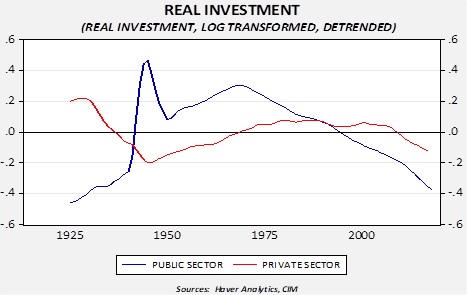 This chart shows real public and private investment against the trend.  There was clear displacement during the Great Depression and the war years, although the cause of the drop in private investment probably had more to do with weak demand and excessive investment as the industrial revolution came to a close.  But, in the 1950s, both rose against trend.  What we have been experiencing this century is unusual; public sector investment has been falling against trend since the early 1970s, but since the Great Financial Crisis, both are below trend.  Thus, we are probably in a position where (a) we probably have too little public investment, and (b) there is probably room for both rising public and private investment.  In fact, one could argue that in the 1950- the 60s, we were able to increase both.

Archegos:  So far, the good news is that the collapse of Archegos Capital has not been systemic.  Although a number of investment banks have suffered losses (some more than others), it doesn’t appear that anyone is in enough trouble to require a bailout.  Still, the event highlighted the problems within the non-bank financial system (“shadow banking”), namely, leverage is widespread.  Servicing banks don’t seem to have a good idea about the security of their collateral.  It also showed how the financial services industry is extremely adept at creating products that (a) allow for high levels of leverage to occur and (b) seem structured to avoid regulatory scrutiny.  The event also shows that regulators always seem to be chasing situations and making new rules that would have protected the markets from what just happened but do little to affect future events.  The SEC is examining what occurred with Archegos; reports suggest that the family office space may be riskier than generally perceived.

International news:  The Taliban is winning; the U.S. restricts trade with Myanmar and the EU takes aim at Poland.

Technology:  We don’t trust or particularly like tech firms.

COVID-19:  The number of reported cases is 129,032,284 with 2,818,245 fatalities.  In the U.S., there are 30,461,312 confirmed cases with 552,073 deaths.  For illustration purposes, the FT has created an interactive chart that allows one to compare cases across nations using similar scaling metrics.  The FT has also issued an economic tracker that looks across countries with high-frequency data on various factors.  The CDC reports that 195,581,725 doses of the vaccine have been distributed with 150,273,725 doses injected.  The number receiving at least one dose is 97,593,290, while the number of second doses, which would grant the highest level of immunity, is 54,607,041.  The FT has a page on global vaccine distribution.  The Axios map shows that infections are starting to increase again despite accelerating vaccinations.

[1] Although a whole different story, this is why China’s economy is such a “high wire act.”  China relies on investment to grow, and, as Michael Pettis has pointed out, it has probably reached the point where the true value of its investment is close to zero if not negative.  In other words, high-speed rail to nowhere increases GDP at the time of the investment but should be written to zero upon completion to account for the waste.