Good morning! Today’s report begins with a brief update on the Russia-Ukraine war. Next, we review international news, focusing on the yen’s depreciation against the dollar. Afterward, we discuss U.S. economic and policy news. We end with our COVID-19 coverage.

Russian and Ukrainian troops have made no notable gains. Meanwhile, NATO forces are set to participate in military exercises in a move designed to deter further Russian aggression in Europe. We suspect Russian attacks will ramp up next week as Russian President Vladimir Putin seeks to find a military victory before he speaks on May 9. The aptly named Victory Day commemorated Nazi Germany’s surrender in 1945; given Moscow’s insistence that Ukraine has been “Nazified,” we suspect he will use this day to promote Russia’s success in Ukraine.

BOJ strikes back: The yen fell to its lowest level against the dollar in 20 years, with the exchange rate hitting ¥130 on Thursday. Over the last few weeks, the dollar has rallied against other major currencies due to the war in Ukraine, COVID-19 lockdowns in China, and hawkish fed policy. However, the dollar’s appreciation against the yen is unique in that it appears to be a deliberate policy move by the Bank of Japan. While the rest of the world has been looking to tighten monetary policy to combat inflation, the BOJ pledged to defend its yield target with unlimited bond-buying. The move by the BOJ suggests that the central bank is deliberately trying to keep its currency relatively weak compared to the rest of the world, likely in an attempt to promote export growth. Unlike most developed countries, Japan’s inflation rate is well below two percent, although it has been rising. Because of the lack of price pressure, the BOJ may view the global shift toward tighter monetary policy as an opportunity to boost economic growth domestically as the economy recovers from its recent COVID-19 outbreak. We suspect risk assets in Japan may become more attractive in the future.

Germany-China: The war in Ukraine is forcing Germany to rethink its entire foreign policy. On Thursday, Germany announced it would drop its opposition to Russia’s oil embargo. The move comes after Russia cut off gas supplies to Poland and Hungary due to each country’s refusal to pay for fuel using rubles. Additionally, Germany is beginning to view its relationship with China as untenable, given Beijing’s support for Russia. Even though China has consistently maintained that it seeks to remain neutral in the Ukraine-Russia conflict, it recently announced that it would remove tariffs on Russian coal. The move by China will make it easier for Russia to sell its energy as it looks to fund its invasion. Our view is that the world is moving toward multipolarity, where power is shared among several states instead of one dominant hegemon. We suspect the world is slowly moving toward blocs led by the U.S. and China.

GDP report: The latest GDP report showed the economy shrank at an annualized rate of 1.4% in the first quarter. The contraction was caused by an acceleration in imports, a decline in inventory building, and a reduction in government spending. Yet, despite the drop in growth, we remain optimistic about the economy. The decrease in government spending and inventory building is likely temporary. Government spending was driven mainly by a decline in defense spending, likely increasing as the U.S. spends more to help Ukraine defend itself against Russia.

Meanwhile, the drop in inventory spending is related to supply chain issues that should improve. Additionally, we suspect that consumption should accelerate in the next quarter; people tend to spend more on leisure and hospitality in the warmer months. The trade deficit will likely remain a liability for the economy. The increase in imports value was related to a rise in trade prices, particularly fuel. Although we are confident that this report will not impact the Fed’s decision to raise rates next week, the weak GDP information could prevent the Fed from attempting a more hawkish policy, such as a 75 bp rate hike later this year. 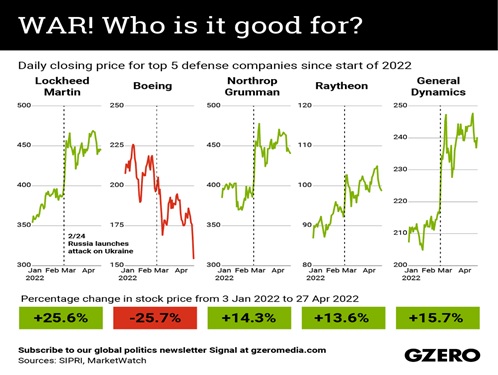 Build Back Better: President Biden’s agenda faced another setback after Senator Joe Manchin (WV-D) announced that he was not willing to support a spending package that would expand EV credits from $7,500 to $12,500.