Today’s Comment opens with our update on the Russia-Ukraine war, where Russian forces are now consistently making some small territorial gains in eastern and southern Ukraine.  There are also increasing signs that the war may be spreading into Moldova, which lies on Ukraine’s southwestern border, and even into Russia itself.  We next review a range of international and U.S. developments with the potential to affect the financial markets today.  Finally, we have the latest news on the coronavirus pandemic.

Russia-Ukraine:  Russian forces continue to probe and advance slowly into the Donbas region of eastern Ukraine, suggesting they have learned a few lessons from their disastrous rush to take Kyiv in western Ukraine early in the war.  Russian troops also continue to attack Ukrainian defenders in Mariupol, including the Azovstal Steel Plant, despite Russian President Putin’s claim there is no more fighting in the city.  Finally, the Russians are apparently ramping up their false-flag operations in the Transdniestria region of Moldova, along with efforts to destabilize the country (see map below).  As we have mentioned before, a growing body of evidence suggests Putin plans to take over not only Ukraine but also Moldova.  On the Ukrainian side of the war, new reports suggest the Ukrainian military has launched more small-scale air attacks against Russian military supply lines throughout the country’s border region.  Apparent attacks were reported today near the Russian cities of Kursk, Voronezh, and Belgorod.  So far, Ukraine has not officially claimed responsibility for the attacks.  A Ukrainian presidential advisor today ascribed them to “karma.”  Separately, 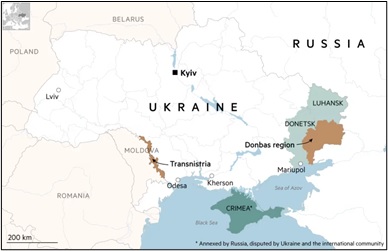 Global Commodity Markets:  In its annual Commodity Markets Outlook, the World Bank said commodity prices would remain elevated for years to come as supply disruptions like the war in Ukraine alter how commodities are traded, produced, and consumed around the world.

European Union:  Despite the ECB’s relative reluctance to tighten monetary policy as aggressively as the Fed, investors increasingly bet the dam will eventually break, and the central bank will accelerate its interest-rate hikes.   Many investors now think the ECB will take its deposit rate, which currently stands at -0.5%, into positive territory by the end of this year and to more than 1.0% next year.

Brazil:  In an effort to bring down the country’s sky-high credit card interest rates, which can exceed 400% APR, the central bank has launched a new regulation requiring banks to share clients’ credit and investment information, such as loan-repayment histories, with their competitors. The effort to boost competition also forces financial institutions to make their fees public, so consumers can compare costs before choosing a lender.  Lowering credit costs and spurring more consumer spending would likely be a positive for the Brazilian economy and risk assets.

China:  New reports suggest Chinese officials are at odds with each other over President Xi’s stringent “zero-COVID” policies and tough crackdown on the country’s real estate developers.  Regulators led by Vice Premier Liu He are concerned that the government is underestimating the economic impact of its policies.  Indeed, because of recent big losses, Chinese stocks are on track to mark their steepest monthly loss in six years during April.  However, other senior officials have opposed any efforts to ease the policies.

China-Pakistan:  The Chinese government has demanded a thorough investigation into a van explosion in Karachi that left three of its nationals dead.  The separatist Baloch Liberation Army claimed responsibility for the attack, which killed the director of the University of Karachi’s Confucius Institute, as well as a lecturer and a volunteer.  Chinese nationals have also died in other terrorist attacks in Pakistan.  The new attack will raise tensions between these two countries.

U.S. Monetary Policy:  As expected, the Senate yesterday confirmed Fed Governor Lael Brainard as the central bank’s new vice chairperson.  The vote was 52-43.  Since Brainard has already been serving as a Fed governor, her confirmation as vice chair shouldn’t alter the policy board’s plans to hike interest rates aggressively.

U.S. Financial Markets:  Amid growing investor appetite for commodities and products tied to the energy transition, Invesco (IVZ, $19.03) said it is launching an exchange-traded fund for metals used to build electric vehicles.  The Invesco Electric Vehicle Metals Commodity Strategy No K-1 ETF will hold futures contracts and other financial products tracking the prices of metals such as cobalt, copper, nickel, and aluminum that are in high demand for their uses in electric cars and other clean-energy projects.

COVID-19:  Official data show confirmed cases have risen to 511,086,383 worldwide, with 6,225,750 deaths.  The countries currently reporting the highest rates of new infections include South Korea, Germany, France, and Italy.  (For an interactive chart that allows you to compare cases and deaths among countries, scaled by population, click here.)  In the U.S., confirmed cases rose to 81,101,161, with 991,959 deaths.  In data on the U.S. vaccination program, the number of people considered fully vaccinated now totals 219,423,356, equal to 66.1% of the total population.

In the U.S., the Omicron BA.2 variant continues to spread, especially in upstate New York, but it is still generating relatively few serious illnesses or hospitalizations.  The seven-day average of people hospitalized with confirmed or suspected COVID-19 came in at 15,908 yesterday, up just 6% from two weeks earlier.  Because of the low level of hospitalizations and general fatigue with the pandemic, the recent outbreak is generating few new policy responses.