Good morning! Today’s report begins with a discussion of how a hawkish Federal Reserve could impact financial markets and the global economy. Next, we review the latest international news, including developments in the Russian invasion of Ukraine. Afterward, we give a brief overview of economic and policy news and conclude with our pandemic coverage.

At the IMF spring meeting, Federal Reserve Chair Jerome Powell suggested the central bank may raise rates by 50 bps in its next meeting and hinted at the possibility of front-end loading policy if inflation remains elevated. His announcement had a negative impact on markets, with some investors pricing the possibility of a 75 bps rate hike in the June and July meetings.  The NASDAQ fell 2.1% from the prior day, while the S&P 500 fell 1.5%. The sell-off in equities was due to concerns that the Fed could make a policy mistake that could lead to an economic contraction.

In his remarks, Powell mentioned that the labor market was too hot and could not be sustained. The reference to employment suggests that the central bank may prioritize inflation over the economy. This point is reinforced by comments made by St. Louis Fed President and voting member James Bullard earlier this month. In an interview with the Financial Times, Bullard urged the Fed to curtail growth as a way to reduce inflation. Although Powell and other Fed officials have dismissed the possibility that increasing rates will lead to a contraction, the market is not convinced. The last time the Fed successfully engineered a “soft landing” was nearly three decades ago. Additionally, forecasts seem to indicate the economy is already showing signs of deceleration. The latest Atlanta GDPNow forecast suggests the economy expanded at an annualized rate of 1.3% in Q1 of 2022. If true, this would be a considerable slowdown in growth from the previous quarter’s rise of 6.9% 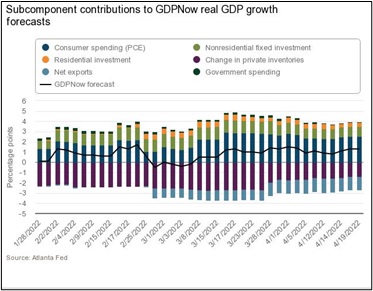 A hawkish Fed also has implications for central banks worldwide, but particularly for emerging markets due to concerns that higher U.S. rates will lead to more capital outflow and less foreign direct investment. As a result, central banks in emerging markets have already started to incorporate the Fed shift into their own policy planning.  The People Bank of China tried to mitigate the impact the Fed’s policy shift would have on its economy by lowering the official yuan midpoint. In Mexico, central bank Governor Victoria Rodriguez Ceja hinted the bank may accommodate its monetary policy to adjust for the Fed’s pivot toward tighter monetary policy.

When the Fed raises rates, it is particularly dangerous for emerging market countries that rely on the inflow of dollars to generate growth and repay debt. Currently, Sri Lanka appears to be most sensitive to rate moves as it was on the verge of a collapse even before the Fed started tightening monetary policy. It isn’t clear whether a default from Sri Lanka will be enough to start a ripple effect on the global economy; however, that doesn’t mean it can’t happen. The 1997 financial crisis started in Thailand and spread across East Asia. Rising food and fuel price will likely increase the chance of an economic collapse in Sri Lanka. As a result, we think rising rates are creating unfavorable investing conditions for emerging market equities.