Our Comment today opens with an update on the Russia-Ukraine war, including a discussion of the trend toward ever-greater U.S. and European sanctions, weapons shipments, and alliance building against Russia, which are likely to lead to greater risks over time.  We next review a range of international and U.S. developments with the potential to affect the financial markets today and conclude with the latest news on the coronavirus pandemic.

Russia-Ukraine:  Russian forces continue to regroup, reequip, and reposition for a concentrated effort to seize control of the Donbas region of eastern Ukraine and the country’s southern coast.  The initial skirmishes in that effort are apparently already taking place, and it looks like Ukrainian forces in the besieged southeastern port city of Mariupol may not be able to hold out much longer, and the Russians’ main attack may still be a week or two away.  In the meantime, the Russians continue to attack both military and civilian targets with artillery, missiles, and aerial bombardment.  Separately, Ukrainian officials said they thwarted a planned Russian cyberattack against the country’s electric grid last Friday.  That success not only illustrates the continued risk of cyberwarfare in the conflict but probably shows the effectiveness of U.S. and Western cyberdefense aid provided to the Ukrainians.  Finally, in his first extended remarks on the war in several weeks, Russian President Putin said ceasefire negotiations with the Ukrainians are at a dead end.  Consistent with the reports from various Western leaders who have met with Putin in recent months, Putin also signaled no intention to moderate Russia’s attacks or goals.  He insisted his forces would achieve complete victory in the war.

U.S. Monetary Policy:  The last 24 hours have included a range of developments related to the Federal Reserve.  The first development to report is simply that former Treasury Department official Michael Barr has emerged as the Biden administration’s top choice to be the Fed vice chairman for regulation, following the withdrawal of former nominee Sarah Bloom Raskin in the face of Congressional opposition.  However, the other developments relate more specifically to Fed monetary policy:

New Zealand:  In its battle against high inflation, the Reserve Bank of New Zealand today hiked its benchmark short-term interest rate by 50 basis points to 1.5% and signaled more rate hikes are likely to follow.  The rate increase today was the institution’s biggest in 22 years.

Japan:  As the Bank of Japan continues to stand by its policy of yield curve control, including a commitment to buy unlimited amounts of Japanese government bonds to cap 10-year yields at 0%, traders continue to sell down the yen.  Earlier today, the currency broke through ¥126 per dollar to trade at its weakest level in 20 years.  The yen is now approximately 9% lower than at the end of 2021. 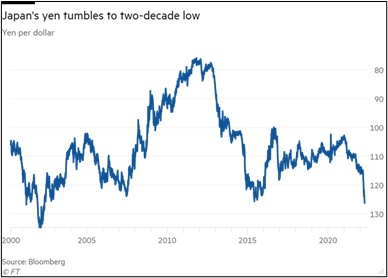 South Korea:  A member of President-elect Yoon Suk-yeol’s transition committee said the new administration would reverse the country’s nuclear phaseout plan, which had been criticized for intensifying the east Asian country’s dependence on fossil fuels.  The statement underscores how nuclear energy has gotten a second look amid rising prices and supply disruptions for fossil fuels.  We believe the trend is bullish for uranium and other aspects of the nuclear industry.

United States-Mexico:  Texas Governor Abbott is facing growing calls to abandon a two-week-old vehicle inspection program that has led to blockades and long queues at border crossings from Mexico into Texas.

United Kingdom:  The London Police Department has fined Prime Minister Johnson and Treasury Secretary Sunak for a series of Downing Street parties that broke the government’s own pandemic rules.  The fines, among 50 imposed on a range of officials, will revive a scandal that threatened to unseat Johnson early this year.  Given the prime minister’s leading role in responding to the Russia-Ukraine war, he is now much more likely to survive the scandal.

Global Oil Market:  In its April update, the International Energy Agency said it now expects that global oil demand in 2022 will rise to just 99.4 million barrels per day (mbpd) versus its March forecast of 99.7 mbpd.  The agency ascribed its lower forecast primarily to the big, new coronavirus wave sweeping across China and the government’s aggressive economic lockdown to combat it.  However, it also suggested that high energy prices are starting to curtail demand in the U.S. and other developed countries.

Global Industrial Metals Market:  As record-high energy prices curtail industrial production in Europe and the war in Ukraine crimps output from Russia, inventories of some of the world’s most important industrial metals have dropped to critically low levels.  Stockpiles of aluminum, copper, nickel, and zinc—four of the major contracts on the London Metal Exchange — have plunged by as much as 70% over the past year as traders and big consumers have tapped warehouses for material.  The trend supports our view that conditions remain bullish for commodity prices.