Our Comment today opens with an update on the Russia-Ukraine war, where both sides are preparing for a new phase in which Russia will focus on seizing only eastern and southern Ukraine.  We next review a range of international and U.S. developments with the potential to affect the financial markets today.  We wrap up with the latest news on the coronavirus pandemic.

Russia-Ukraine:  The military situation in the war remains in a relative lull, with Russian forces having pulled out of western Ukraine, including the region around the capital city of Kyiv, to regroup and reequip for an effort to seize control of the eastern Ukrainian region of Donbas and the country’s southern coastline.  In the meantime, Russian forces continue to attack a range of military and civilian targets with artillery, missiles, and aerial bombs.  Satellite imagery and other intelligence suggest Russian ground forces are already deploying into battle positions in eastern Ukraine, although some analysts think they will need several more weeks of preparation before launching major new assaults.

France:  In the first round of presidential elections yesterday, centrist President Macron and the far-right firebrand Marine Le Pen came out on top, setting them up for a head-to-head matchup in the second and final round on April 24.  With some 97% of the votes counted, the tallies currently show Macron winning 27.6% and Le Pen 23.4% of the first-round votes, ahead of the far-left candidate Jean-Luc Mélenchon with 22.0%.  Le Pen benefited from a late surge that reflected widespread disaffection over inflation, security, and immigration.

Pakistan:  After Prime Minister Khan was ousted in a no-confidence vote over the weekend, parliament today is set to confirm opposition leader Shehbaz Sharif as the country’s new leader.

Mexico:  President Andrés Manuel López Obrador was projected to win more than 90% of his referendum questioning whether he should serve out the second half of his six-year term.  However, the turnout was below 20%, well short of the 40% needed for the result to be binding.  Many critics and opponents of the president considered the poll a farce or mere grandstanding.

U.S. Labor Market:  Evidence continues to suggest that more retirees may be returning to the labor market, which could potentially help relieve labor shortages and hold down wage rates.  Perhaps driven by the steep rise in consumer price inflation, more than 480,000 aged 55 and over started working or looking for work in the past six months, compared with just 180,000 who entered the labor force in the six months before the pandemic struck.

U.S. Financial Market:  The Federal Reserve continues to tighten monetary policy; state and local governments have responded by calling off bond issuances and spending down their federal stimulus cash.  As a result, bond issuance by state and local governments dropped 8% in the first quarter from a year earlier. At the same time, data show that spooked investors yanked money from municipal-bond funds, which suffered their biggest quarterly outflows since 2013. 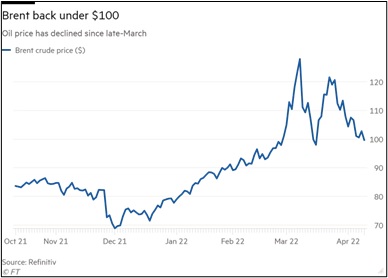