Our Comment today opens with an update on the Russia-Ukraine war, where little has changed militarily over the last day, but geopolitical and economic pressures on Russia continue to mount.  We next review a range of international and U.S. developments with the potential to affect the financial markets today.  We wrap up with our pandemic coverage.

Russia-Ukraine:  Militarily, reports continue to indicate that the Russian invasion forces in western Ukraine around the capital city of Kyiv are being pulled back, apparently for reequipping and regrouping before being redeployed to Kharkiv, the Donbas region of eastern Ukraine, and the country’s southeast coast.  Other fresh units based in Russia proper are also reportedly being prepared for action in eastern Ukraine.  In the meantime, the Russians continue to attack civilian areas throughout the country with artillery, missiles, and aerial bombs.  Simultaneously, Ukrainian officials continue to unearth evidence of apparent war crimes in areas previously occupied by the Russians. 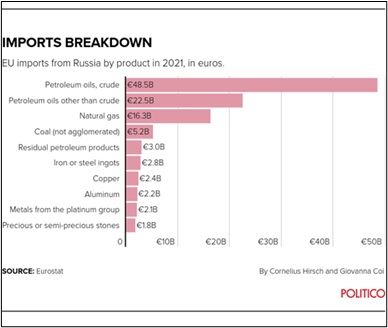 Hungary:  Just days after Prime Minister Orban, a right-wing nationalist and Russia sympathizer, scored reelection by a landslide, the European Union has launched a process that could allow it to impose financial penalties on Hungary for corruption and rule-of-law abuses.  Use of the “conditionality mechanism” could jeopardize some of the €24 billion that Budapest is due to receive up to 2027.

Sri Lanka:  The country is facing a foreign exchange crisis as its government grapples with looming debt payments, widespread protests, and an economic emergency.  After President Rajapaksa yesterday was forced to end emergency rule imposed just days earlier, the Sri Lankan rupee is hovering near 300 per dollar.  It is down 32% year-to-date and lagging even Russia’s ruble.

U.S. Monetary Policy:  Federal Reserve Governor Brainerd, who has ordinarily been considered a dove on inflation, yesterday said “it is of paramount importance” for the central bank to start reducing today’s fast price increases, both by hiking interest rates and selling down its portfolio.

U.S. Agriculture:  Amid the search for hedges against galloping inflation, investors are reportedly ramping up their purchases of U.S. farmland and driving up prices.  Land values in the Midwest grain belt have gained 25-30% in just the past year, and auctions draw intense bidding for available ground.  Real estate investment trusts (REITs) focused on farmland, such as Farmland Partners (FPI, 13.83), have also been strongly appreciating.