Good morning!  We begin today’s report with a brief update on the Russian invasion. Next, we discuss U.S. economic and policy news, with an emphasis on yesterday’s yield curve inversion.  We follow with our international news roundup and COVID-19 coverage.

Ukraine and Russia are scheduled to resume peace talks on Friday. There is growing optimism that the sides are getting closer to reaching a ceasefire agreement. Ukraine has stated that it is willing to accept Russia’s demands to remain a neutral state, meaning it will not join a military alliance with either Russia or the U.S. As we have mentioned in the past, we are not optimistic that a ceasefire agreement will completely end the conflict. While talks have improved, the conflict between the sides continues.   Ukraine President Volodymyr Zelensky has accused Russian troops of deliberately targeting agriculture, while the Kremlin claimed two Ukrainian helicopters attacked an oil depot in a Russian city. However, there have been signs of de-escalation. Russian troops have left Chernobyl and a northern suburb of Kyiv. 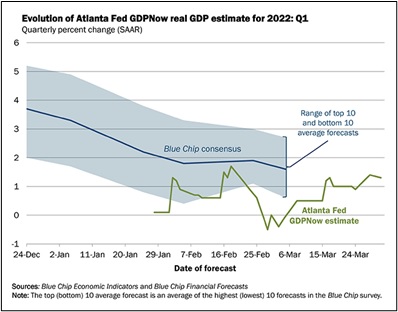