The business cycle has a major impact on financial markets; recessions usually accompany bear markets in equities.  We have created this report to keep our readers apprised of the potential for recession, which we plan to update on a monthly basis.  Although it isn’t the final word on our views about recession, it is part of our process in signaling the potential for a downturn.

December brought a wave of positive news about the economy. U.S. large and mid-cap equities ended the year at record highs largely due to strong performance in the Technology sector.[1] Moreover, the U.S. and China announced an agreement for the “Phase One” trade deal. Additionally, strong retail sales around the holiday break offered reassurance that U.S. consumption, which is the largest contributor to GDP, remains strong. However, not all was positive. The manufacturing sector continued to show signs of weakness that will likely persist into 2020. Last month, Boeing (BA, 323.89), arguably the largest U.S. manufacturing exporter, announced that it will suspend production of its Boeing 737 Max starting in January. It is estimated that the production cut will reduce annualized GDP by 30 to 50 bps. That being said, our diffusion index has remained unchanged from the previous month with nine out of 11 indicators in expansion territory. The reading for this month came in at +0.575. 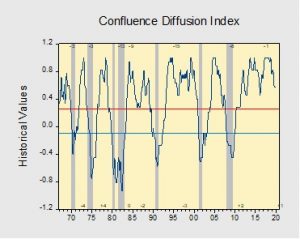