As the FOMC prepares to reduce its balance sheet, it’s a good time to update our views on long-term interest rates.  The chart below shows our current estimate of fair value for the 10-year Treasury. 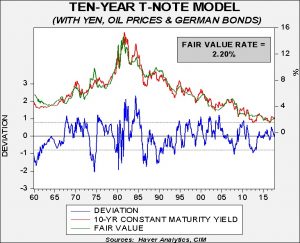 The model uses fed funds, the 15-year moving average of CPI (an inflation expectations proxy), the yen/dollar exchange rate, oil prices and German bond yields.  The current yield is on fair value.  Assuming the other variables remain steady, the current yield on the 10-year T-note is assuming the FOMC is going to hold rates steady for the foreseeable future.

Is this assumption on the policy rate reasonable?  Currently, fed funds futures don’t reach a 50% chance of a rate hike until the June 2018 meeting, and even by next December the odds of a rate increase are only 67%.  We expect the Yellen FOMC to use balance sheet contraction to placate the hawks on the committee and thus avoid increases in fed funds until it becomes abundantly clear that inflation is rising.

One of the reasons for expanding the Fed’s balance sheet was to lower long-term interest rates.  In reality, the evidence of success is mixed. 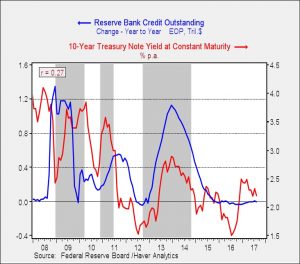 This chart shows the 10-year T-note yield with the yearly change in the balance sheet.  The gray bars show official periods of QE.  A zero reading indicates no change in the balance sheet compared to the prior year.  Rates fell in QE1, at least initially, although they did rebound as the recession came to an end in mid-2009.  However, rates generally rose in QE2 and QE3.  Although the Fed was buying longer dated Treasuries, which reduced its supply, it appears the demand may have weakened on fears that QE would trigger inflation.  Thus, a case could be made that reducing the balance sheet would have a similar effect and push rates lower.

Our base case is that reducing the balance sheet will have an asymmetric effect on markets; in other words, it won’t have a significant impact on interest rates, unlike the apparent bearish impact that QE2 and QE3 had on long-term interest rates.  This is because the FOMC is framing the reduction in the balance sheet as “normalization,” whereas QE was designed to be stimulative.  Thus, our analysis suggests that the most important impact of QE was psychological.  However, it is possible that QE did more than just boost sentiment; if so, balance sheet normalization could be bullish for long-duration bonds.