Traditionally, the election season kicks off with Labor Day so, with last Monday’s holiday, the election cycle is upon us.  The midterm election year tends to be lackluster for equities until Q4, when a strong rally usually develops. 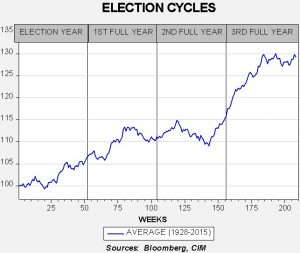 The data for this chart is developed by taking the weekly closes for the S&P 500, beginning with the first Friday close in 1928.  We index the data over the next four years and then average each week across each four-year cycle.  Thus, this graph represents 22 cycles.  The election occurs around week 48 in the election year.  On average, the euphoria surrounding the election lasts until week 80 (into the summer of the year after the election) when equities become range-bound.  Some of this pattern is probably due to the inevitable disappointment that a new administration can’t implement all the changes it promised.  By the midterm year (third full year), equities test the low end of the range into October then begin a multi-month rally that persists into the middle of the year after the midterms.  Another range-bound pattern develops into the election year.

The following chart shows how the current administration compares to the average. 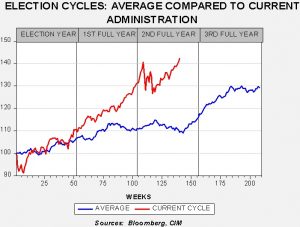 Clearly, the Trump administration has been popular with investors, especially during the first full year after the election.  The tax cuts boosted equity prices into Q1 of this year.  However, concerns about trade, tightening monetary policy and worries about the midterms have all likely conspired to bring a period of consolidation.  Equities have improved recently, making new highs.  The range-bound pattern that has emerged this year is consistent with the average election cycle pattern, albeit from a higher level.

The key question is whether we will see the typical midterm rally in Q4 through next summer.  As we discussed last week, although there are worries about political turmoil in the wake of a potential change in power in Congress, the political situation, by itself, probably won’t derail the bull market.  The primary threat to the bull market is recession and the most likely culprit would be overly tight monetary policy.  Given the current pattern of tightening, we don’t expect that to be a problem until H2 2019.  Thus, the pattern will probably hold but, given the recent strength in equities, we would not necessarily expect the usual 20% rise seen after the midterms.  However, a more pedestrian rally of 5% to 10% would not be a surprise.  To conclude, we do expect a post-midterm rally, perhaps less vigorous than average but a stronger equity market nonetheless.