Last week, the FOMC left rates unchanged, as expected.  The statement was rather hawkish but the accompanying information, such as the “dots” chart, was mostly dovish.

Note that three of the 17 members of the committee want to stand pat for the rest of the year and two want to raise rates only once next year. 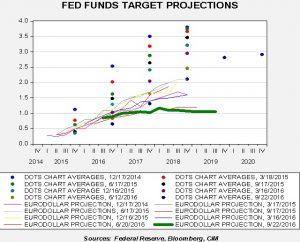 This chart shows the average projected rate from the dots chart along with the projected fed funds rate from the Eurodollar futures market.  A couple interesting trends are emerging.  As we have seen for some time, the FOMC is steadily lowering its terminal rate, the policy rate where tightening ends.  They still hold out hope for a normalization in the long run, around 3%, but this expectation has been in the dots for some time.  It never actually seems to occur.  For this year, expectations are modest; on average, in fact, there is a chance that no hike will occur, even though the Eurodollar futures have one discounted.  However, the Eurodollar futures are also looking for a terminal fed funds rate of around 1.25% at its peak.  Simply put, the financial markets expect that the conditions that have led to low rates will continue well into 2019.

What would lead to rate normalization, which appears to be a rise to 3% for fed funds?  The most obvious catalyst would be a rise in inflation.  As long as the world remains awash in excess capacity, inflation will remain low (assuming trade remains open).  That’s why the presidential elections are important.  We expect Donald Trump to restrict trade, whereas Hillary Clinton will, for the most part, try to maintain the current trade structure.  For now, we expect that rates will rise, but expect a terminal rate of 1.25% for fed funds.