The Financial Accounts of the U.S. was released last week by the Federal Reserve.  The report is a treasure trove of data about the economy.  This report shows the flow of funds and the balance sheet of the American economy.  Although there is much to look at, here are a few charts that show the underlying health of the economy and the financial system. 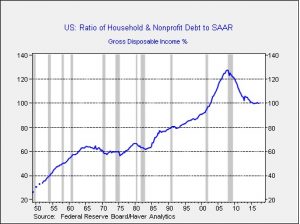 This is a “good news/bad news” situation.  On the good side, the end of deleveraging will support stronger consumption.  When households are trying to pay back debt, it acts as a dampener on economic growth.  If households begin to add to debt relative to their incomes, growth accelerates.[1]  The bad news is that the deleveraging has ended at historically high levels of debt.  Although this level is probably manageable at current interest rates, spending may prove to be unusually sensitive to interest rates due to the current elevated levels of debt relative to income. 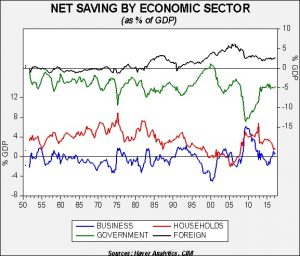 This chart is one we closely monitor; it is net saving by sector.  Net saving in macroeconomics is much like a balance sheet—saving in one sector is always offset by dissaving in another and the sum of the four sectors always equals zero.  What is most disturbing in the data is that household saving has declined and business saving has increased.  In general, business saving funds investment; in a well-functioning economy, businesses should be dissavers.  Rising business saving means less investment and the decline in household saving means that the household sector will become vulnerable to economic weakness. 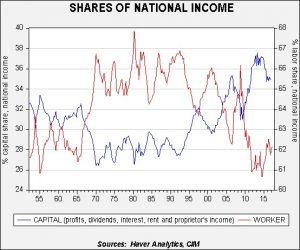 Since roughly 1990, the labor share has tended to decline and has made new lows in each business cycle.  Capital income has performed in an opposite fashion.  This growing divergence is part of the reason for the rise in populism.  Even with the advanced age of the business cycle and low unemployment, the labor share remains low relative to history.

The Financial Accounts of the U.S. are showing that the expansion is getting a bit old.  Although there is no evidence of a recession on the horizon, the weakness in household saving is a concern.  The end of deleveraging does bode well for the economy in the short run but the continued high level of debt is a worry.  Finally, the current political problems the country is facing will likely require a drop in the share of capital at some point.  That will not be a favorable event for financial assets.

[1] Assuming, of course, that all the additional consumption would not be supplied by imports.