Profit margins are off their highs but have started to improve. 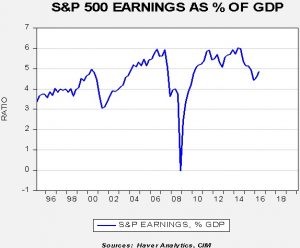 This chart takes total S&P 500 operating earnings as a percentage of GDP.  Excluding the financial crisis, operating earnings have been running between 5% and 6% of GDP for most of the past decade and a half.  In the middle of last year, this percentage fell below 5% and has remained below that threshold for the past four quarters.  Falling energy prices appear to be the culprit for the drop in margins.

Here is our updated model. 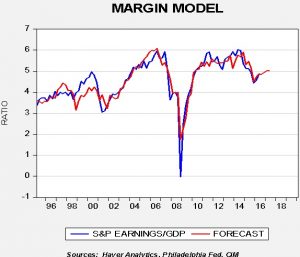 The key to the forecast is that the dollar will gradually weaken as the terminal rate is lowered for fed funds and as oil prices recover to $52 by mid-2017.  If the dollar unexpectedly strengthens, which would also lower oil prices, we would need to adjust our forecasts lower.  Of course, this also means that earnings will exceed our current estimates if the dollar weakens more than we expect (EUR/USD > $1.14) and/or oil prices rise more than forecast.  The actual recovery in margins is a welcome sign for earnings, although we believe that most of this good news is already reflected in current prices.  However, the good news is that, barring a recession, we should avoid a major market correction.

[1] Also known as the Flow of Funds report.