In a recent speech,[1] New York FRB President Bill Dudley made the case that the FOMC should continue to reduce monetary stimulus even though inflation remains below target.  His contention is that benign financial conditions in the face of tighter policy are creating distortions in financial markets, resulting in the need for additional policy tightening.

Congress has given the Federal Reserve dual mandates—full employment and low inflation.  The Phillips Curve would suggest that meeting both is often impossible.  The curve postulates that there is a tradeoff between inflation and unemployment, and so meeting one objective probably means missing the other.  Since the 1970s, the Phillips Curve has become increasingly less reliable; globalization and deregulation have led to persistently falling price pressures.  In other words, inflation is falling on its own, and thus monetary policy can mostly focus on full employment.  Based on the current unemployment rate, it is likely that full employment has probably been achieved, although the persistence of weak wage growth would suggest that the Fed should be in no hurry to raise rates.

Although the FOMC has dual mandates, every central bank has the goal of financial stability.  After all, the primary reason for creating a central bank is to build a system for a lender of last resort who will lend to financial institutions during liquidity crises.  The Federal Reserve was created in 1913 in response to the Panic of 1907, which was single-handedly stopped by John Pierpont Morgan (yes, that J.P. Morgan).  President Roosevelt, while relieved that private bankers were able to end the panic, was also worried that relying on this solution in the future was tempting fate.  Thus, he started the debate on creating a U.S. central bank that resulted in the founding of the Federal Reserve six years later.

During financial crises, commercial banks face liquidity problems.  Banks operate by maturity transformation.  They take short-term loans (also known as deposits), repayable on demand, and transform them into less liquid but higher yielding loans.  As long as depositors don’t demand their money en masse, the system works well; cash becomes investable and helps build the economy by providing funds for investment.  However, in a panic, banks may be forced to liquidate good loans to meet the demands from depositors.  This selling can damage the financial system needlessly.  The central bank is designed to lend against these loans so that banks can meet depositor demand and quell the panic.[2]

Essentially, one of the key roles of a central bank is crisis management.  Thus, most central banks have regulatory power to prevent commercial banks from taking excessive risk.  Reserve requirements, capital requirements, bank inspections, stress tests and the general level of interest rates are all used to reduce the likelihood of a panic.  Creating an environment of healthy fear can curb bankers’ “animal instincts” and prevent them from becoming overly optimistic and making aggressive loans.  Unfortunately, if the Federal Reserve is successful in its Congressional mandates, it can prolong the business cycle.  As Hyman Minsky noted,[3] the longer economic conditions appear calm, the greater the likelihood that investors, borrowers and lenders will be inclined to take more risk.  The Minsky Instability Theory postulates that economic actors are more likely to create instability the longer conditions remain stable.

Dudley’s comment about financial stability is worth examining.  On the chart below, we overlay the Chicago FRB National Financial Conditions Index along with the fed funds rate. 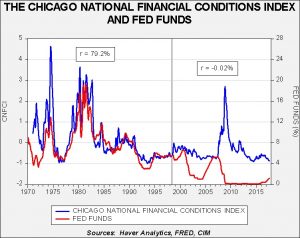 The blue line on the chart shows the aforementioned Financial Conditions Index, which measures the level of stress in the financial system.  It is constructed of 105 variables, including the level of interest rates, credit spreads, equity and debt market volatility, delinquencies, borrower and lender surveys, debt and equity issuance, debt levels, equity levels and various commodity prices (including gold).  A rising line indicates increasing financial stress or deteriorating financial conditions.  The red line is the effective fed funds rate.  Until mid-1998, the two series were positively and closely correlated.  When the Fed raised rates, financial stress rose; when the Fed lowered rates, stress declined.  After 1998, the two series became virtually uncorrelated.

We believe there are two factors that changed this relationship.  The first is policy transparency.  Starting in the late 1980s, the Fed became increasingly transparent.  For example, before 1988 the FOMC would meet but issue no statement about what it had decided to do.  Investors and the financial system had to guess whether policy had been changed.  Starting in 1988, the central bank began publishing its target rate.  In the 1990s, it began issuing a statement when rates changed.  Eventually, a statement followed all meetings.  As the FOMC has become more transparent, the correlation between stress and the level of fed funds has changed.  Essentially, the markets now know with a high degree of certainty when rate changes are likely.  This is especially true of tightening.  The FOMC appears to avoid making rate hikes that surprise the market.

The second factor is financial system stability.  From the Great Depression into the 1980s, policymakers put a high premium on system stability at the expense of efficiency.  Bank failures were rare and there were a large number of rather small institutions.  In addition, commercial banks were separated from investment banks.  The drive to improve efficiency in the financial system led to consolidation among commercial banks and a breakdown of the barriers between commercial and investment banks.  Although this made the system more efficient, it also undermined stability.  Thus, when raising rates, the Fed must pay close attention to system stability to prevent crises, which has tended to lead to gradual and measured policies.  This behavior maintains stability…until it doesn’t!

It appears that Dudley would like to return to the pre-1998 period.  We tend to agree with that sentiment.  Monetary policy would be much more effective if financial stress moved directly with changes in policy rates.  However, if our thesis that transparency and industry concentration led to the change in the relationship, it seems highly unlikely that policymakers would reverse those conditions.  Instead, we now live with markets where policymakers have virtually no control over financial conditions; the longer conditions are quiet, the more emboldened investors, lenders and borrowers are likely to become.  And, when financial conditions deteriorate, it seems to require extraordinary measures by central bankers to restore calm.  This means that investors live in a world where financial conditions appear benign most of the time until they are not and then they become quite adverse.  Monetary transparency has probably created distorted financial conditions where risks are hidden and thus encourage risky behavior, suggesting investors should exercise more caution than financial conditions currently signal.

[2] The problem for the central bank is determining if a commercial bank faces a solvency or a liquidity crisis.  If the assets of the bank, its loans, are dodgy, the lending against them is probably a mistake and the bank should be liquidated.  On the other hand, if the loans are of good quality, then lending against these loans is a sound way to contain a banking panic.