The 10-year T-note yield dipped to 1.45% in early September but has risen strongly since then.  What has prompted this rise?  Some of the rise appears to be caused by a revaluation of the path of monetary policy.

The chart on the left shows the implied three-month LIBOR rate, two-years deferred, from the Eurodollar futures market.  After falling to a low near 1.15%, the yield has jumped to 1.58%.  The chart on the right shows this implied rate compared to the fed funds target.  Although the backup in the implied rate has reduced the expected decline in fed funds from nearly 100 bps to around 60 bps, the spread remains inverted, meaning the market still expects the Federal Reserve to cut rates somewhere between 50 bps and 75 bps over the next two years.

Our 10-year T-note model suggests that long-duration yields are too low, or prices on these instruments are too high. 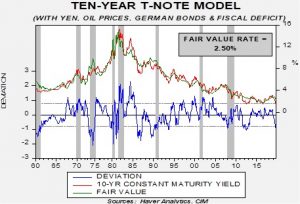 This chart shows our 10-year T-note yield model.  The deviation line is at the one-standard error level.  Essentially, the bond market yield is consistent with recession.  If the bond market is right and a recession is coming, the chart above suggests that if that recession is a “garden-variety” type, like those seen in the 1990-91 and 2001 downturns, then it would be unlikely that we will see further yield declines.  On the other hand, when the model suggests long-dated Treasuries are overvalued and a recession doesn’t follow, the backup in yields is notable.  It’s still too early to tell if a recession is coming, but the evidence that one could develop is increasing.  Our analysis suggests, however, that the protection that long-duration Treasuries usually offer in a recession and bear market may not be all that significant at current yields.  If the above LIBOR analysis is correct, the recent backup in those yields would suggest a fed funds rate of around 1.50% and a fair value 10-year Treasury yield of 2.27%.  Thus, the recent backup in yields likely has further to run.