At the recent Kansas City FRB’s gathering at Jackson Hole, the tone from policymakers turned surprisingly hawkish.  Vice Chair Stanley Fischer was quoted as saying that two rates hikes are possible this year and the upcoming FOMC meeting in September could generate a rate hike if the payroll numbers are on trend.  Until those comments, the financial markets were mostly leaning toward no change in rates until 2017.

The best argument for rate increases is that the labor market is tightening.  The theoretical construct for policymakers is the Philips Curve, which postulates that tight labor markets boost wages and eventually inflation.  There have been periods in U.S. history when the Phillips Curve was a useful tool for policy.  Over time, it has become increasingly controversial as institutional changes, such as the decline of labor unions, deregulation and globalization, have changed the slope of the Phillips Curve.  Despite these changes, policymakers continue to use the Phillips Curve (best seen in the Taylor and Mankiw models, which attempt to set rates based on inflation and the level of slack in the economy) for lack of other alternatives.

The issue of slack is important, because the presence of available productive capacity would mean the FOMC would not need to tighten policy as much compared to a situation where capacity is constrained.  One of the great unknowns about the economy is whether the unemployment rate or the employment/population ratio better reflects the labor market. 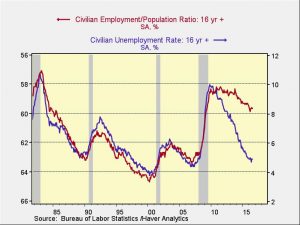 This chart shows the two series, with the employment/population ratio on an inverted scale.  From 1980 into 2010, the two series closely tracked each other.  However, since the recession, the two have diverged.  The unemployment rate would suggest a labor market without much slack.  The employment/population ratio would indicate that there is ample slack in the economy; if the relationship had held, the unemployment rate would be closer to 8%.  If the divergence is structural, due to baby boom retirements along with geographic and skills misalignment, then the issue is probably not going to change suddenly and slack will continue to diminish.  If, on the other hand, discouraged workers can be lured from the ranks of the unemployed with modestly higher wages, then sizeable slack exists.  At 8% unemployment, the Fed should be easing.

Here is another way to look at the data. 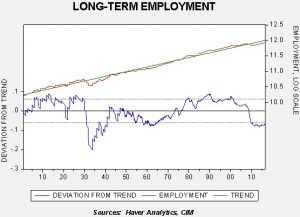 This chart shows a time trend of total employment.  The data is annual from 1900 to 1947 and monthly thereafter.  We have regressed a time trend through the data.  Note that employment growth was above trend into the Great Depression and didn’t consistently return to trend until the mid-1970s.  Employment remained above trend into the 2008 Financial Crisis but has been depressed since.

It is quite possible that after a traumatic event, like the 1930s or the 2008 crisis, the labor market takes a long time to normalize.  Note that social norms capped employment during the 1950s and 1960s.  There were legal and social restrictions by race and gender that likely prevented a recovery above trend.  Racial and gender equality laws, coupled with social changes, led to steady employment growth from the early 1960s; by the late 1970s, employment had risen well above trend.

We suspect the current situation has more in common with the Great Depression than the early 1960s, but that doesn’t mean it’s a duplicate situation.  The demographics are different—the baby boomers are retiring.  But, we do suspect that there is a pool of workers that could be tapped if the economy grows quickly enough.  Thus, the FOMC probably has much more time than it thinks to raise rates.  Despite this opinion, the Fed will likely move at least once, if not twice, before year’s end even if a strong case can be made for remaining steady.  The key variable we will be watching is the dollar—if the Fed raises rates and the dollar appreciates strongly, look for the FOMC to back away from moving rates higher.  On the other hand, if the dollar does not react, there are probably more hikes to come.