In June, we published a WGR on the EU’s decision to issue a Eurobond, a financial instrument backed by the full faith and credit of all the member states of the European Union.  One of the reasons the U.S. dollar remains the global reserve currency is because the world financial system works on a dollar/Treasury standard.  The U.S. has open trade and capital markets.  Because of America’s willingness to accept persistent trade deficits, foreign countries can acquire dollars through trade and easily hold those dollars in reserve in the deep American financial markets.  The premier reserve instrument has been the U.S. Treasury; in fact, it could be argued that the Treasury is America’s greatest export product.

The attractiveness of the dollar as a reserve instrument is relative; American management of the reserve currency is far from ideal.  When the world shifted from the dollar/gold to dollar/Treasury, Europeans complained that the U.S. was exporting inflation through a weaker currency.  Treasury Secretary Connally noted that the dollar “is our currency but it’s your problem.”   Volcker’s anti-inflation policies of the early 1980s was a major contributor to the Latin American debt crisis and the “lost decade” of the 1980s for South America.  Since 9/11, the U.S. has used financial sanctions as a foreign policy tool.  Restricting access to the U.S. financial system has proven to be very effective in crippling foreign economies.[1]  But, these sanctions are not popular with foreign governments.  Dissatisfaction with dollar management has not reached a level adequate to overcome the network effects that keep the dollar as the reserve asset.

It is important to note that we view the introduction of a Eurobond as a catalyst for a change in trend but the primary reason for a new dollar bear market is valuation.  Against most major currencies, the dollar is deeply overvalued. 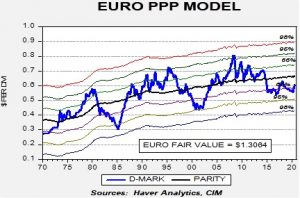 Our primary valuation model for currencies is purchasing power parity.  This model uses relative inflation to value currencies.  It is not a trading model; exchange rates tend to vacillate around the forecast parity level.  But, at extremes, it can signal that the exchange rate is vulnerable to a reversal.  In general, dollar bull markets tend to end with a catalyst.  The 1970s dollar bear market began with the closing of the gold window.  The 1985 bull market ended with the Plaza Accord.  The 2002 trend reversal began with statements pressing for a weaker dollar from the U.S. Treasury secretary.  As is true of many markets, valuation alone doesn’t cause reversals, but it creates conditions where a reversal is more likely.

Perhaps another way of thinking about the dollar is that the exchange rate creates winners and losers.  A strong dollar adversely affects exporters and industries that compete with imports.  It supports importers and solely domestic industries.  A weak dollar has the opposite impact.  Thus, over time, when a sector is harmed a political reaction will follow which leads to a reversal in trend.  With the dollar, the cycles tend to be long, meaning that the level needs to be extreme to trigger a policy response. 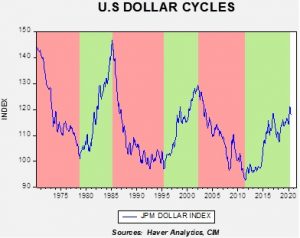 This chart shows the JP Morgan Dollar Index, which is adjusted for inflation and is trade weighted.[2]  Bull markets are colored in green, and bear markets in mauve.   For a U.S. dollar investor, the path of the dollar’s exchange rate is a critical component of foreign investing.

This table uses the dollar cycle dates and compares the MSCI U.S. Index with the MSCI World ex-U.S. Index.  We use the yearly change in monthly data, averaged over each cycle.  On average, the latter index outperforms the U.S. in dollar bear markets, whereas the U.S. outperforms during dollar bull markets.  There are two other characteristics of note.  First, cycles last a while; the average dollar bear market lasts 111 months (just over nine years) and dollar bull markets last 88 months (eight years).  Second, dollar bear markets tend to have higher levels of volatility.

If our postulate is correct and the dollar is about to enter a bear market, the outlook for foreign stocks relative to domestic stocks improves.  Although there is no certainty that our position is correct, the combination of an overvalued currency, a lengthy bull market, and a Eurobond catalyst increases the odds that a reversal is likely.  If so, the outlook for foreign equities should improve.

[1] Iran can attest to this assertion.

[2] Countries that conduct more trade with the U.S. are weighted more heavily in the index.