Since the beginning of September, 10-year T-note yields have risen from a low of 1.52% to a high of 1.75%.  This backup in yields is as issue we are monitoring carefully because we have favored long-duration assets for some time.  We analyze long-dated interest rates by starting with a fair value assessment of the 10-year T-note yield. 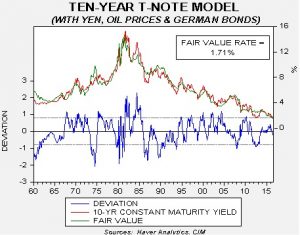 This is our full T-note model.  It uses the effective fed funds rate, the 15-year average of inflation (a proxy for inflation expectations), the yen/dollar exchange rate, oil prices and the yield on German bonds.  The current fair value rate is 1.71%, suggesting that the long end is a bit overvalued at current yields.  A hike of 25 bps in the effective fed funds rate would raise the fair value yield to 1.88%, assuming no change in the other variables.  Thus, the recent rise in yields is due, in part, to concerns about the potential for tightening monetary policy. 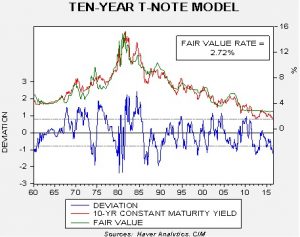 By focusing on domestic factors, the 10-year T-note is deeply overvalued.  In fact, a comparison of the models shows that international factors have played a key role in lowering yields over the past two years.

As we assess the prospects for the three international variables, we expect oil prices will likely be rangebound.  Over the next year, we look for the average price of oil to hold around $50 per barrel.  In the near term, however, seasonal factors will likely weigh on oil prices and support lower T-note yields.  Barring helicopter money in Japan, the JPY will likely drift higher against the dollar which will also bring lower T-note yields.  The key factor will probably be German yields.  German yields ticked higher after the ECB refused to adjust policy last week.  But, worries about the upcoming Italian referendum, expected to be held as early as October, and the rising likelihood that the ECB will eventually boost stimulus should lower German bond yields.  Thus, for now, we believe the case for long-duration fixed income remains in place.

Longer term, we continue to closely monitor the expansion of populism.  Populist policies will tend to eventually lift inflation and will most likely end the long decline in interest rates.  For now, the establishment continues to hold sway but we would expect that somewhere in the next four to eight years, or perhaps sooner, inflation will return and we will need to position portfolios for such an environment.