In our most recent asset allocation rebalancing, we added foreign allocations to our portfolios.  Over the past few years, we had generally avoided allocations to non-U.S. markets in asset allocation portfolios due to two primary concerns.  First, the dollar had been appreciating as a result of an improving U.S. economy and policy divergences between the U.S. and the rest of the world.  The Federal Reserve was raising rates and tapering its balance sheet while the majority of other nations were still adding monetary stimulus.  Second, we have had secular concerns about the stability and attractiveness of foreign investing in a world where the U.S. is seemingly reducing its hegemonic role.

We previously noted that the dollar was deeply undervalued on a purchasing power parity basis and vulnerable to depreciation.  The catalysts for dollar weakness appear to be coming from two sources.  First, the FOMC is moving very slowly to tighten policy while the rest of the world’s central banks are finally withdrawing policy stimulus.  Second, uncertainty surrounding American governance appears to be undermining investor confidence and leading to dollar selling.  In this week’s report, we wanted to update the valuation levels for the dollar against the yen, euro, Canadian dollar and British pound. 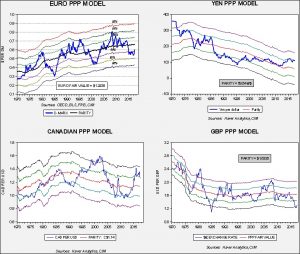 This chart shows four purchasing power parity models for the aforementioned currencies.  In all four cases, the dollar was trading “rich” by more than one standard error, and nearly two standard errors from parity in two cases.  Over the past two months, three of the four currencies have begun to appreciate and are indicating some modest improvement in valuation.  However, these models all suggest that the dollar is still overvalued and thus, even with the recent depreciation, the greenback is still overvalued.   Hence, the narrative that a weaker dollar should support further gains in overseas assets remains viable.  If history is any guide, we are still in the early stages of a dollar reversal that should remain in place for the foreseeable future.

At the same time, the secular concerns about the impact of the withdrawal of U.S. hegemony will likely be a bearish factor for overseas investments.  For now, we expect the dollar’s weakness to overshadow concerns over global stability.  But, as some point, possibly in the next couple of years, the dollar will be closer to fair value and the case for foreign investment will be more difficult to justify.