Emerging markets have fallen in recent weeks.  The decline is being driven by a couple of factors.  First, the dollar has appreciated due to concerns that tariffs will restrict foreign country access to the U.S. consumer and the dollars they spend.  In other words, if the U.S. restricts trade, countries will struggle to acquire dollars for reserve and trade purposes.  As we will show below, there is a clear inverse correlation between the dollar and relative emerging market equity performance.  Second, and related to the first point, restricting access to dollars coupled with tightening monetary policy has led to crises in nations with high levels of foreign debt; namely, this has been the case in Argentina and Turkey, although we are seeing weakness spread to other nations as well, including South Africa.

The arguments for owning emerging markets from a macro perspective are based on expectations of dollar weakness and a Fed that doesn’t overtighten monetary policy.  First, a look at relative performance. 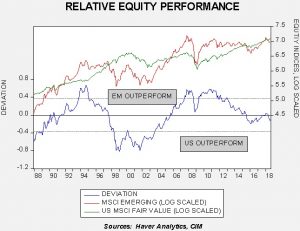 There are two variables that generally explain the divergence, the dollar and fed funds.

The chart on the left shows the dollar and relative performance.  In general, a weaker dollar tends to support emerging market performance.  A stronger dollar increases the risk for emerging markets that borrow in dollars as it increases debt service costs.  And, many emerging market economies are commodity producers and a stronger dollar tends to pressure commodity prices.  The dollar peaked in early 2017 and appeared to be rolling over.  As we have discussed before,[1] on a relative inflation basis, the dollar is overvalued.  However, in late Q1, President Trump began discussing tariffs and trade barriers.  The potential for trade restrictions is bullish for the dollar; the problem is that there is nothing in the historical record since WWII that would suggest how bullish barriers might become.  In addition, it isn’t completely clear what the end point of tariffs will be.  However, if the president is successful in narrowing the trade deficit, it would be dollar supportive.

The second chart shows the impact of monetary policy on relative performance.  Although the fit isn’t as strong as the dollar, there have been policy cycles where rate cuts boosted emerging market outperformance.  Thus, Fed tightening would tend to favor the U.S. over emerging markets.  Our analysis suggests the FOMC will raise rates to around 3%, which would not be unusually tight based on historical ranges.  Thus, we believe this level is already discounted in the market.

So, do emerging markets look attractive?  If the dollar rolls over, emerging markets should do better.  What would make the dollar weaken?  Anything that suggests the drive for trade protection is being mitigated, either by political turmoil or Congressional action, would likely pressure an already extended greenback.  We tend to rely on parity extremes to forecast our dollar outlook and, as noted, we are at levels that should support dollar-bearish positions.  At the same time, we will have to assess our view on the government’s trade policy going forward.  Trade protection will tend to support a stronger dollar and lead to further weakness in emerging markets.