We have previously documented the difference between S&P 500 operating earnings reported by Thomson/Reuters and Standard and Poor’s.  Although both series purport to measure the same thing, there can be rather wide divergences.  These exist due to differences in how unusual events are accounted for; we do often see long periods where the two series are identical but, in this bull market, the Thomson/Reuters data has tended to consistently exceed the S&P numbers. 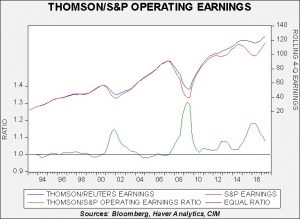 This chart shows the two series from 1994, with the lower line showing their ratio.  The reason we monitor these divergences is that an elevated ratio has led to bear markets and recessions in two previous instances.  Fortunately, the ratio is narrowing, although the difference in terms of the past four quarters is still notable, with Thomson/Reuters at $125.07 while the S&P is at $116.14.

One reason for the recent change in the ratio could be oil prices. 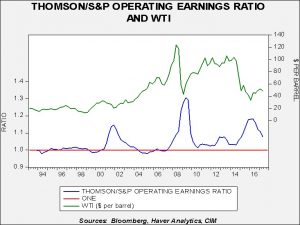 The drop in oil prices coincided with a widening of the ratio.  Thus, it is possible that S&P treats the impact of falling oil prices on earnings differently than Thomson/Reuters.  If oil prices remain elevated from recent lows, the spread between the two series should also narrow.

This year’s earnings story continues to be the expansion of margins.  Looking at S&P operating earnings compared to GDP, we have seen a solid recovery in margins.  Our margin model has been projecting a recovery and stabilization around the level of 5.5% of GDP.  If that is the case, the growth rate in earnings should slow to the pace of nominal GDP over the next few quarters. 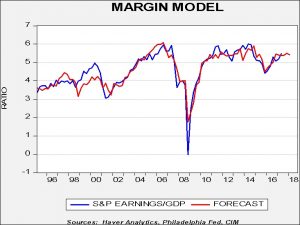 Based on our analysis, we are on pace for a year-end operating earnings number, basis Standard and Poor’s, of $121.50, a 14.3% rise over this series report from last year.  A similar growth number for Thomson/Reuters would put this year’s earnings at $136.10 compared to the current expectation of $131.10.  However, since the gap between the two earnings series is narrowing, current expectations are probably about right as that would be consistent with the current ratio.  If the two narrow further, current expectations may be too high.  Still, in any case, margins remain strong and should offer support for equities.