(Note: due to the upcoming Labor Day holiday, there will not be an accompanying podcast episode this week.)

With the first update of Q2 GDP, the Commerce Department released its corporate profits for the economy.  Using after-tax profits, which exclude inventory adjustment and depreciation, profits relative to GDP hit a new record. 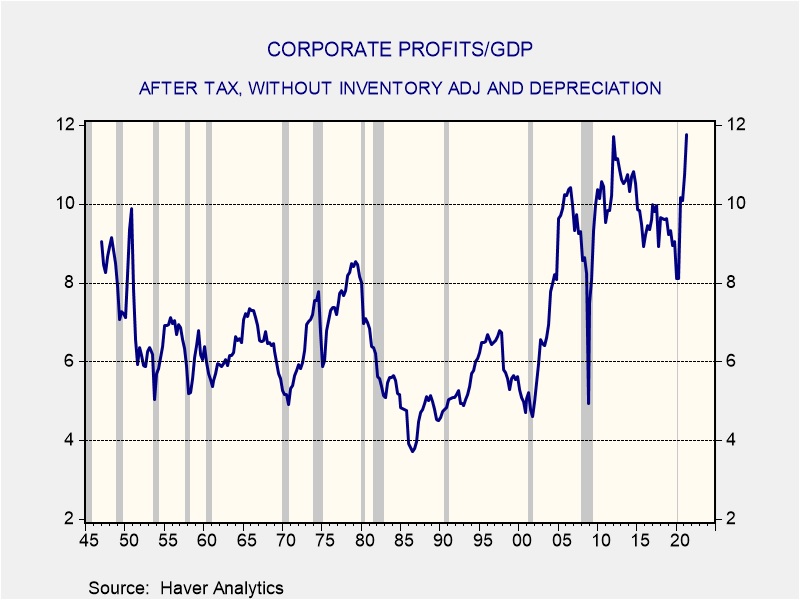 By this measure, profits were 11.8% of GDP, edging out the previous peak of 11.7% in Q1 2012.  The data show that it is not unusual for profits to decline in recessions and rebound in recoveries.  However, this recession, though deep, was the shortest on record.  The profit/GDP recession trough was the highest in the postwar era; in other words, the usual profit decline, scaled to GDP, was much less than seen in earlier recessions.

S&P 500 operating earnings relative to GDP have hit a new record as well. 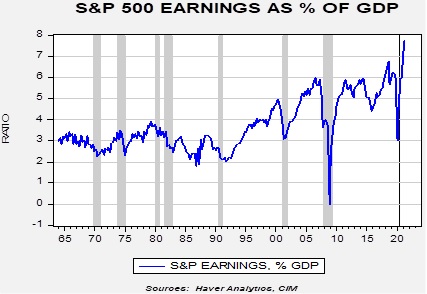 The key question is whether the surge in profits, both on the national level and for the S&P 500, can be sustained.  The history of both series suggests that, absent a recession, earnings tend to moderate but remain elevated.  So, optimism about future earnings is justified.  However, there is a broader issue at work.  In the 1970s, when inflation was elevated, corporate profits tended to rise in tandem with prices.  Firms, facing higher costs, were able to pass along these costs to their customers.  This action exacerbated inflation.  Until we see supply constraints ease, inflation will continue to rise unless consumers reduce their spending or profit margins fall.  If margins are maintained, either inflation will remain elevated or consumers will have to reduce their spending.