With the elections about a month away, we are fielding an increasing number of questions about the market impact of the result. Although some market commentators are raising concerns about a Trump victory, so far, market data doesn’t seem to suggest a high level of correlation. 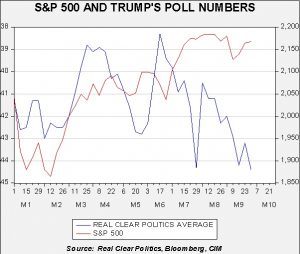 This chart shows Donald Trump’s average poll numbers on a weekly basis (using an inverted scale) along with the S&P 500 index on the same basis since the beginning of the year.  The weakness seen in the equity markets in Q1 did coincide with reasonably strong numbers for Trump, but most of that equity weakness probably had to do with monetary policy.  Note that as Trump’s poll numbers have improved, equities have also improved.  This could mean that (a) financial markets are not all that concerned about a Trump victory, (b) financial markets simply believe that there is no way Trump will win, or (c) the outcome of the election isn’t material, because the outcome of most elections are not material to the markets.  The correlation of the two series is a modest -1%, suggesting that the two are virtually uncorrelated.

Similar results are seen when comparing Trump’s poll numbers against the performance of gold and the 10-year Treasury yield.  So far, the most significant relationship is the Mexican peso. 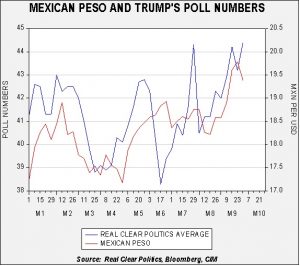 The MXN/USD exchange rate is pesos per dollar, meaning the higher the reading on the above chart, the weaker the peso.  As Trump’s poll numbers have improved, the Mexican currency has weakened (the correlation is 54%).  This relationship makes sense.  Trump has promised to “build a wall” on the Mexican border and has called for a rewriting of the North American Free Trade Agreement (NAFTA).  A Trump win could be very disruptive to the Mexican economy and thus the peso has been very sensitive to the path of the election thus far.

We believe a Trump victory would be a bearish surprise to the financial markets.  Although he has promised many things, we suspect his priorities will start with immigration and then move to trade which is second on the list.  He has offered a large infrastructure spending package as well.  Although his tax policy has excited traditional supply-side Republicans, we doubt the tax policy is a high priority for Mr. Trump.  His policies would be potentially inflationary which could be bearish for both equities and debt.  Of course, proposing policy and getting measures through Congress are two different issues.  We have doubts he will be able to execute much of his platform.  But, the uncertainty alone could increase market turbulence.  Thus, as the election approaches we would expect increasing market volatility until the outcome is determined.